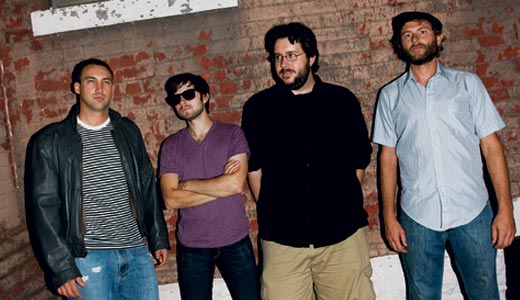 The first time I saw The Pass, they opened their set with a Pink Floyd cover at Wick’s on Baxter. That choice might not lend itself to any sort of progression — how many times have you heard a Pink Floyd cover in a bar? — but what happened next would be nothing short of a sharp right turn.

As bassist Will Roberts explains, the first incarnation of The Pass demoed a batch of songs at Cornerstone Studios before Roberts and the other principal songwriter, singer and guitarist Kyle Peters, abruptly scrapped their game plan in favor of a new sound.

“I guess I would call it psychedelic electronic dance rock,” Roberts said, citing Talking Heads, Franz Ferdinand and MGMT as references, as well as a crop of hipper Brooklyn bands. “We were looking to a lot of music that we really liked, and said, ‘If we’re not fans of our band, how is anyone else going to like our band?’”

In June, the two began writing what would become The Colors EP, a half-electronic, half-rock concoction, using home studio gear at Roberts’s house. On June 20, the new Pass performed at WFPK’s Live Lunch with Brian Healey on keyboards and Neil Lucas on drums. “We had never had a full band practice before that,” Roberts said. “We’ve got to be one of the first bands to do that.”

The Pass downplays its electronic side live — “it’s more like a rock band playing a dance show” — but play up the stage show with lights and fog. “We use a lot of fog,” Roberts said. “You can’t see the band.”

Friday, they celebrate the release of The Colors EP at Pour Haus with IamIs and Dude Plays Saxophone. The $5 cover gets you a copy of the EP. Matt Anthony DJs in between sets and after the band.