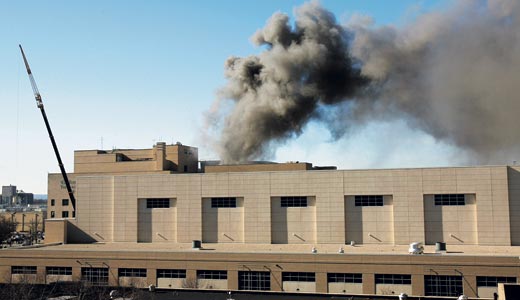 In the boneyard that is contemporary print journalism, Gannett Co., which owns The Courier-Journal, has so far avoided the deathwatch list. Seven newspaper companies are currently in bankruptcy, and many observers believe another, the McClatchy Co., is headed there. But Gannett, despite lagging ad sales, has held its own by making several tough business adjustments.

Lost amid the most recent, a workforce reduction of more than 1,300, is what some financial analysts say is a ticking time bomb that could force the company into bankruptcy. And because of how the financial stars have lined up of late, those investors may actually have an interest in seeing that happen.

Gannett, like all newspapers, has been hurt by plunging ad sales. The company’s stock, which topped $90 a share in April 2004, went as low as a $1.95 in March and was up 9 percent at the close of business Monday, selling at $6.35 a share.

But Gannett’s real problem is debt. According to a recent story on the business website The Deal, the company has $712 million coming due in 2011, with another $2.8 billion in the first half of 2012. That’s a lot of change, and because of the poor condition of newspapers in general, investors have essentially bet that Gannett won’t be able to make bank.

The Deal story, citing several unnamed “distressed debt” experts, raised the specter of Gannett being forced into Chapter 11 reorganization, largely because many bondholders have utilized credit default swaps, which are a financial device — a derivative — designed to lessen a bondholder’s risk. In this case, those with Gannett CDSs would recoup all of their money if the company defaults.

Credit default swaps have been implicated in several high-profile collapses, including AIG and General Motors. The Deal story points out that Gannett is also subject to heavy CDS volume, and contends that “Gannett as we know it will be lucky to last through 2011.”

Although newspapers have cut staff to save money, about 85 percent of their spending goes toward non-human resources, according to Robert Picard, a Swedish business professor who was quoted in a February story in Business First of Louisville. That means the rest is tied up in things like printing presses and trucks — the old way of delivering the news. The Courier-Journal, for example, opened a new $85 million printing plant in 2004, and now typically runs only one of its three presses.

Gannett is certainly aware it needs to get a handle on its debt, and recently tried to extend maturity dates by offering significantly more attractive terms. But buyers were lukewarm; only 26 percent of the new offerings were sold. (That’s better than McClatchy, however, which tried a similar tactic and sold only 9 percent of new offerings.)

Gannett executives have issued statements insisting the company “has the capacity to pay our debts,” but the analysts cited by The Deal call that wishful thinking. Gannett’s recent quarterly earnings report, which was better than expected, is still too little, too late, The Deal contends.

Through an assistant, Courier-Journal Publisher Arnold Garson declined to comment for this story. Gannett corporate spokesman Bob Dickey did not return a call seeking comment.

Assuming the CDS scenario is plausible, the salient question for the Louisville area would concern the fate of The Courier-Journal. In the event of a Chapter 11, it’s not difficult to imagine someone being very interested in a newly streamlined C-J, minus its debt and cumbersome union agreements.

It’s hard to say how a Chapter 11 would play out, says Mark Robinson, a Louisville attorney with a bankruptcy concentration. “Anything could happen,” he says.

For a clue about how a multi-faceted company like Gannett might be dispersed, says Mark Fitzgerald, editor-at-large for the journalism trade publication Editor & Publisher, it might be instructive to watch the Tribune Co. as it proceeds through Chapter 11. Tribune Co., which owns the Chicago Tribune and Los Angeles Times, filed for reorganization in December, but so far it’s been slow going.

Gannett’s detractors would like nothing better than to watch the company go bust, but not everyone sees the story playing out that way. Fitzgerald, for example, seriously doubts Gannett will go belly up.

“In terms of debt, they’re really in a much better situation than most publicly traded newspaper companies with substantial debt,” he says. “I really don’t think it is in the cards for the foreseeable future.”

On a local level, the C-J is taking, by its own calculation, “unprecedented” steps to beef up the bottom line. “For a limited time,” according to a note on its website from Garson, new and current advertisers can take advantage of up to $500,000 in free advertising. New advertisers are being offered a “buy one, get one free” deal, while existing clients can double their ad size or frequency “for a minimal incremental spend.”

The offers are good for a limited time and don’t require contracts.

Dan Barbercheck, president of red7e, a Louisville advertising firm, says it’s still hard to beat the C-J’s market penetration, and that its print edition is right for some clients, “particularly those who wish to reach an older, more educated and more civic-minded audience.” But, he adds, it’s “priced non-competitively for the mass market on a cost-per-eyeball basis, and the quality, dependability and duration of the reader’s daily newspaper experience seems to be on the wane.”

He also believes daily newspapers are being consciously managed into their own demise. “Cost-cutting seems to be the only way to derive profit, which lowers product quality, which lowers consumer demand—” which led him to an analogy of a milk farmer who seeks to make more money by reducing his cow’s feed. “The farmer may realize that the practice of drawing profit from relentless cuts in ‘operating cost’ is unsustainable, but still wants to get the maximum immediate economic gain from his cow. As the cow inevitably weakens, he sells it to a meatpacker, retires to the Florida panhandle and tells himself nobody likes milk anyway.”