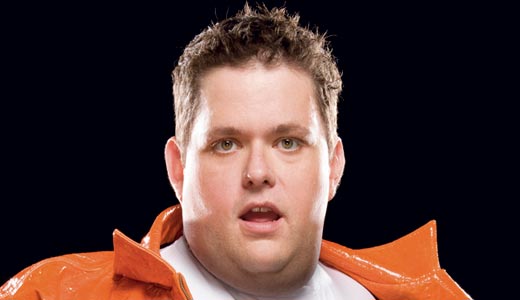 Ralphie May is a raucous, brash and sometimes controversial comedian who shot to fame as runner-up on the first season of “Last Comic Standing.” Hundreds of shows, innumerable miles and three hour-long Comedy Central specials later, Ralphie returns to The Louisville Improv.

Ralphie May: He’s 2 weeks old and he’s awesome. He was born eight pounds, seven ounces. He’s got big, monster balls … monsters. I’m not really sure I’m his father — his junk is that spectacular. But hey, I guess I am; she says I am, so I’ll take it for what it is. I’ll keep him.

RM: She’s awesome. The vagina’s not 100 percent, but she’s back. She’s moving around, she feels good, the baby weight is coming off, she’ll be back at 125 in a couple of weeks. It’s crazy; she can’t keep weight on her.

LEO: How do you run a family with both parents on the road?

RM: We have a nanny [who] watches them while we’re on stage, but when we’re not performing, we spend all day with our kids, so I think we see our kids a lot more than the average parents, to be honest with you. But also, Louisville has a great zoo, so we’re gonna take the kids to the zoo; we’re gonna take ’em around and show ’em everything.

LEO: What do you think about the critics who bash comedians, like yourself, on the Internet while hiding behind “anonymous” monikers?

LEO: Have you ever felt like you went too far on stage with a joke?

LEO: You don’t tend to go with fat jokes. Rather, you seem to challenge your audience more. Is that a conscious decision?

RM: It goes back 18 years. Two other fat comedians talked to me, one was Dante Garza and the other was Charlie Shannon. They both pulled me aside and said: “It’s not our job to tell you what to do with your comedy, but do you want to be known as a fat comedian, or a comedian who just happens to be fat?” And I was like: “You’re absolutely right. I don’t just want to be a fat comedian.”

LEO: You work so much with the U.S.O. Some say it was almost detrimental to your career for a while. Is that true?

RM: After “Last Comic Standing,” I went on a big U.S.O. tour, and my manager was furious with me, and my agent was, too, because at the same time I was over there, I could’ve made like over $100,000 here. They were furious because, to them, that’s 15 percent. But I know that the men and women over there needed it a lot more; they needed it more than I needed the money, more than my manager needed it, and more than my agent needed it. They needed me more.

LEO: Is that something you’ll continue to pursue now that you have two children?

RM: If something happens to me, it happens to me. If I lost my life to something I love, serving the people that protect me and my country and my freedom of speech, how I’ve made my living, how I’ve made all my money, how I’ve done everything. If I die in their service, what a good example I’m leaving my children, ya know? To be selfless, to give to others that need you, when they need you — that’s the greatest lesson a father can give his children.