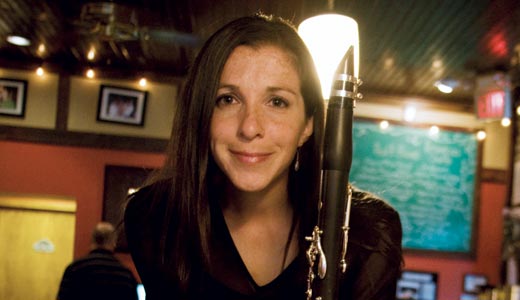 The big plus of the Louisville Orchestra’s summertime switch from the ROARchestra series at the Louisville Zoo to a Summer Classics series this July at Ballard High School and RiverStage, in Jeffersonville, is the symphony will skip the show tunes and pop medleys and instead play real classical music. The oldies-but-goldies national acts are out, and the symphony’s own top players are in, as soloists. You can put the themes from “The Godfather” and “Oklahoma” in the rear view mirror, say bye-bye to Miss “American Pie.”

This summer, the symphony will build its schedule around Tchaikovsky symphonies and Mozart concertos.

“Well … I kind of enjoy show tunes,” says principal clarinetist Andrea Levine, who will perform the Mozart clarinet concerto on July 16 and 18. “People think that people who play in orchestras only want to play classical stuff. But the other is fun, too, and I really like playing show tunes.”

But don’t worry — she loves Mozart.

“I began playing clarinet when I was 11, and I think I started working on the Mozart concerto when I was 12 or 13,” says Levine, who grew up in Queens, N.Y., and studied collegiately at the Eastman School of Music and the Cleveland Institute. “I think it’s the most important concerto [for clarinet] we have. It’s a nice challenge to get up there and play the stuff I’ve been working on since I was a kid.”

ROARchestra, of course, was not dropped because of its musical programming choices. It drew large audiences during its 15-year run at the Louisville Zoo. But it was expensive to stage. When a large bank pulled its sponsorship and Louisville Metro sliced its arts budget, the curtain dropped.

“We did shop around to see who might fill those voids, but they’re very expensive numbers,” explains Rob Birman, the new CEO of the Louisville Orchestra. “Louisville is not going through anything every other city is not facing. When the economic climate improves, we would love to bring ROARchestra back.”

But while waiting for the banks to reopen, the orchestra did not wish to abandon a summer schedule.

Jeffersonville jumped in to sponsor concerts at RiverStage, a floating theater stage it owns on the Ohio River, at the foot of Spring Street in Jeffersonville. That’s on Saturday nights under the stars. On Thursday nights under the air conditioning, the symphony will perform in the Ballard auditorium, which enjoys a reputation among musicians as a hall with excellent acoustics.

Birman says he envisions a day when the orchestra might emulate the summer styles of Millennium Park in Chicago, Tanglewood, Aspen and the Hollywood Bowl — and offer both popular and classical programming. He says he has talked with Louisville philanthropist David Jones about a permanent venue somewhere in the City of Parks initiative.

“It is my personal hope that someday we will have something here like the Boston Esplanade, where the Boston Pops plays. A beautiful expanse of grass, with a band shell, where people would come down on their bicycles and families would bring picnics and sit out on blankets to hear beautiful music.”

Louisville Orchestra maestro Jorge Mester will conduct this summer’s concerts, which signals the orchestra is serious. Mester selected Tchaikovsky’s fourth, fifth and sixth symphonies — the composer’s most famous — to anchor the three-week series.

Levine notes that Mozart is not technically difficult. But the music is so pure it must be done perfectly.

“With the Mozart,” she explains, “you spend a lot of time practicing over and over again to get the note endings to be just right, or the going from this note to that note to be really smooth, because it has to be — I can’t really explain it. That’s the way it is with Mozart.”