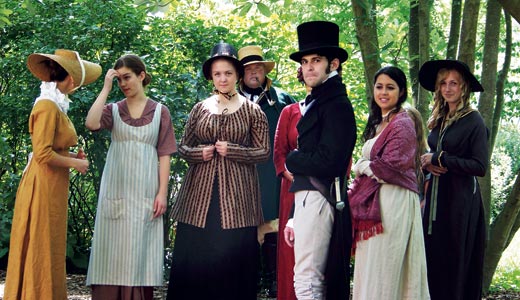 It is a truth universally acknowledged — that a brilliant writer in possession of a large collection of critically acclaimed work must be in want of a dedicated fan base. That being said, Jane Austen would likely be pleased with her devoted followers, who will descend on the Historic Locust Grove this weekend for the Second Annual Jane Austen Festival. Those enthusiastic Austen followers, often referred to as Janeites, will have a chance to celebrate their passion for the writer in the true style of genteel rural society, with lovely teas and a grand ball, along with some informative workshops sprinkled in throughout the festivities.

The creator of this event is Margaret Sullivan, a woman who has devoted her life not to the quest for a man with a large fortune, but to lauding the works of the acclaimed author. The Austen fanatic keeps a daily online journal, AustenBlog.com, and has written a handbook to teach men and women of the 21st century how to behave in the fashion of an Austen character. Though informative, Sullivan intends for her book, “The Jane Austen Handbook,” to be taken lightly.

The book stems from questions Sullivan had after reading Austen for the first time when she was 29 years old. She explains terms, phrases and customs new readers might not understand. She’s part of the Jane Austen Society of North America, which she says is a mix of those with formal education and those who merely foster extreme affection for the writer and her work.

It’s clear Sullivan exhibits her love for Austen in a way some might find excessive, even those who are merely content to read her words. On her website, Sullivan publishes her fiction — known as fan-fiction, it cops some of Austen’s stylistic elements and includes characters from her novels here and there.

“It’s something I’m learning all the time, and I think I’m getting better at it as I go along,” she says. “I tried to imitate Jane Austen at first … I didn’t succeed.”

At the festival, Sullivan will discuss the five things a Jane Austen hero or heroine needs to know. She is scheduled to speak at 11 a.m. on both Saturday and Sunday. The cost of the event is $6, and if one wishes to participate in the tea, it is $25 and requires advance registration.