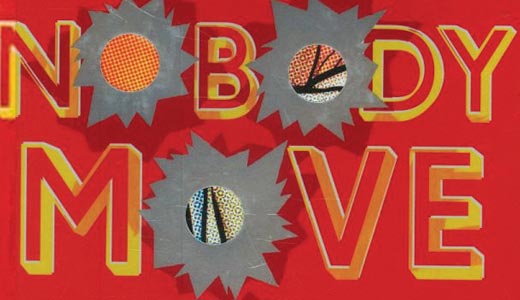 Nobody move — and no one will, at least while enthralled by the pages of Denis Johnson’s new book, “Nobody Move.” Johnson follows up his National Book Award-winning novel, “Tree of Smoke,” with this hardboiled throwback to the L.A. crime novels of the late ’40s and ’50s.

Being a fan of the fiction of Raymond Chandler, I often wondered how such material could be revamped for audiences today, especially without the quirky toughness of Philip Marlowe to cool our heels at the exact moment the action gets white hot. Instead of one wisecracking PI, Johnson conjures a variety of charming lowlifes, including one Anita Desilvera, a Native-American beauty who guzzles Popov swill and likes to hog the karaoke machine at the Ramada Inn so she doesn’t have to endure the same drunken butchering from others. Then there’s dumb thug Gambol who likes to chomp on the testicles of his double-crossers, and his crime boss, “Juarez,” who pretends to be Mexican so as not suffer post-9/11 anti-Arab discrimination in the kingpin underground.

So what else sets this new breed of crooks and desperados apart? For one, they drive matching Cadillac Broughams (pronounced bro-hams in Watts) and blare out Damn The Torpedoes as they muscle through the desert in hotrod Camaros. Some even compete in local barbershop a cappella tournaments, while others don’t hesitate to interrupt an “interrogation” to tout the value of a good steak at Outback. Make no mistake, every character in “Nobody Move” thrives with wit and vitality, and as ruthless and cruel as each misfit proves to be, there’s always a bandage ready to come off their wounds and rip the reader into their macabre plight.

Perhaps the most unique addition to the genre is the on-the-page inclusion of one of those drunken hookups that fade out between chapters of “The Maltese Falcon” and “The Big Sleep.” Of course the publishing decorum of the ’40s and ’50s wouldn’t allow for such blatant carnality, but it’s a safe bet — given how much they liked to knock ’em back — that there were plenty of sloshed bedroom bumblings, the reality of which always had to remain undisclosed. This is not the case in “Nobody Move.” Even if Chandler had the same legerdemain as writers today, I don’t think he would’ve been able to dial down his patented machismo into something so clumsy yet still tender and sexy as Johnson accomplishes here.

Denis Johnson astounded critics in the early ’90s with his debut collection of short stories entitled “Jesus’ Son.” His Vietnam epic “Tree of Smoke” vaulted him into the elite of the American literary firmament, though many critics and fellow writers already esteemed him so, not only by his fiction, but by the ample verve of his poetry, plays and essays. Perhaps the most impressive thing about Johnson’s body of work is his ability to flourish throughout a variety of literary forms while at the same time excavating unmatched portholes into the estranged psyche of the American West. Indeed, there are times in “Nobody Move” when I have to put the book down so as to let certain passages sizzle in my imagination.

For those uninitiated in Denis Johnson’s fiction, there’s no better place to start: Surly, cool and quick-as-a-bullet to read, “Nobody Move” refuses to relent. Others enamored of the terse, drug-addled voices of “Jesus’ Son” will no doubt be entertained by this indie rock reverb of the American crime classic.