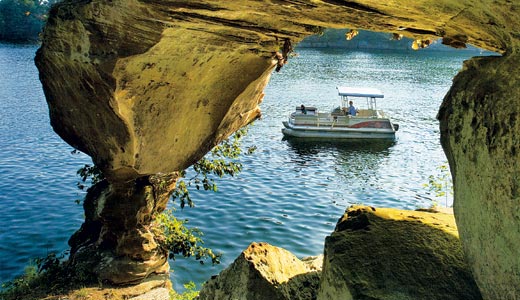 The usual thing with travel books is: A publisher hires a writer to cover all the hot spots, then illustrates the book by purchasing stock photos and perhaps commissioning a few new pictures to fill in the holes.

But the way writer Susan Reigler did it in “The Complete Guide to Kentucky State Parks” was to collaborate from the start with photographer Pam Spaulding. That’s how they captured such a spontaneous moment as this:

“It was a very quiet, early summer morning at Lake Cumberland,” Reigler writes. “The weekend crowds had left, and the wooded circle of two-story, chalet-style cottages overlooking the lake was deserted. Walking around the building from one of the Wildwood cottages, I was startled to see a tiny, spotted fawn tumbling down the slope of the mound at the center of the cottage circle. Legs flailing in all directions, it rolled to a stop. Its fur still shining wet, this little deer had just arrived in the world. Another sound of an animal crashing through nearby trees meant that Mama had taken off into the woods when I intruded on the scene.”

Spaulding also heard the sound of the fawn sliding down the hill, and was soon snapping a shot that would end up in the book.

Then the writer and photographer handed the scene back to Mother Nature.

“And even though [the doe] was gone for the moment, the newborn was going to be just fine,” Reigler continues. “I left immediately, had a late breakfast at the park lodge, and returned a couple hours later to find the doe attending her baby.”

Reigler, who had previously penned “Kentucky: A Compass American Guide” for the travel-guide publisher Fodor’s, says the University Press of Kentucky left the format for the new “Kentucky State Parks” guide entirely in her hands.

“I decided I would write about what happened to us, to do a personal essay about each trip to a park, to tell stories,” she explains. “Here’s an adventure I had, and here’s some nuts and bolts information about the place so you can go and have your own adventure.”

There are no restaurant stars or luxury linen ratings. No endless lists of hours and prices. It’s Kentucky. Things cost about what you’d think. The book is about the parks.

Reigler, formerly a travel writer and restaurant critic at The Courier-Journal, and Spaulding, who continues with the photography staff at the paper, planned their researching forays to visit all of Kentucky’s 52 parks and historic sites in one year. “We probably planned this out as carefully as Eisenhower planned D-Day,” Reigler says. “We had it all mapped out, at which parks we would stay, and others we would visit nearby. Try to cover the whole state. And we did.”

Kentucky is known for its huge lakes and deep forests, but Reigler notes that some of her best adventures came at small historic sites, including the very smallest: the one-quarter-of-an-acre cemetery near Danville where Isaac Shelby — the first governor of Kentucky, hero in two wars and famous frontier figure — is buried with his wife and family.

“You go back a road, kind of in the middle of a farm,” Reigler says. “We were greeted by a couple of farm dogs who came up and flopped down on their backs to have their bellies scratched. We just sort of hung out, surrounded by row crops and a house in the distance. Just a very lovely central Kentucky farm.”

Not far from Shelby’s resting place is the William Whitley House, near Stanford, a stately brick home built in the 1780s along the Wilderness Road. Reigler found the place to be something of a one-house lesson in life on the Kentucky frontier.

Like the front door, which seems unusually high off the ground.

“Originally, the family got to the door by climbing a ladder they pulled in behind them,” Reigler writes. “Windows look symmetrical from the front, but as another defense from American Indian attacks, interior walls end in the middle of many of them. The house also has a secret staircase and a windowless kitchen with a false ceiling providing a cramped but secure hiding place.”

“When you go there, you still get the feeling of what a remarkably isolated place this must have seemed to the settlers,” Reigler says. “Then to come upon this beautiful house. It was an outpost. But it wasn’t just a fort; it was a beautiful home. Probably something almost magical in coming upon that, I would think.”

But the photographer never forgets that the biggest star of the parks is the beauty. Spaulding sneaks up on unsuspecting nature, capturing fragile beauties like Moth Mullein wildflowers in a prairie grass field near lake’s edge at Barren River. Then she steps back and fills her lens from the high vistas of Eagle Point Lookout at Dale Hollow.

“The Complete Guide to Kentucky State Parks” is neither hardback nor paperback, but instead hearkens to a floppy, carry-along style like the old Peterson Field Guides. Read it at home. Take it along.

Reigler and Spaulding appear for a talk and book signing at 4 p.m. on Sunday, Aug. 2 at Carmichael’s, 2720 Frankfort Ave.