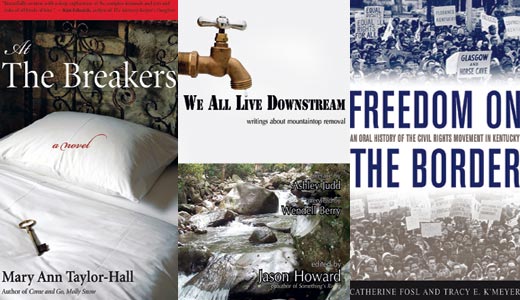 Staring at a mountain of local authors’ requests for reading events this past May, Carmichael’s Bookstore owner Carol Besse had a eureka! moment: 10 events, all featuring Kentucky talent, in one summer month. Before long, Besse and her events team (both members) were off and running.

“The marketing aspect of releasing a book is really tough for authors who don’t have a big publisher behind them,” Besse says. “We thought we could help these writers get some attention. For us, it is really an opportunity to get people into the store and talking about books. Hearing someone read directly from their book is a whole different experience.”

Talking over a cup of coffee at Heine Brothers, Carmichael’s events coordinator Jeff Howington seems relieved that the August lineup came together with no problems. But along with relief comes a sense of pride that Carmichael’s can put together events like this that have an impact on the community — something the chain bookstores tend to miss.

“This is one thing we can do that they can’t because we have been in the neighborhood for 30 years,” Howington says. “We know people individually. Events like these have a direct meaning to people who live here. It’s the advantage of being the small guy.”

Saying the August lineup sports a diversity of styles would fit nicely in the understatement hall of fame. With a jovial blend of poetry, fantasy, Southern humor, political activism and historical reportage, these events offer a little something to everyone. Here are just a few of the flavors Carmichael’s (2720 Frankfort Ave., 896-6950; visit carmichaelsbookstore.com for full schedule) will have on tap throughout August:

Mary Ann Taylor-Hall’s
“At the Breakers”

Part of a Carmichael’s fiction night, this work is Taylor-Hall’s second novel and shows her treading some of the same feminist waters as her first book, “Come and Go, Molly Snow.” This story follows Jo Sinclair, a New England mother whose teenage pregnancy robbed her of much of her early promise. Now a 40-something waitress, she escapes an abusive relationship by taking a position as a painter in a run-down hotel called The Breakers, finding strength through its eccentric inhabitants.

The story is poignant, gripping and deeply felt on the part of its author, who, though an admitted feminist, hopes that won’t limit her readers’ conclusions upon finishing the novel.

“I want readers to feel they have been involved in a drama of weight and significance, one that makes them feel more deeply about their own lives,” Taylor-Hall says. “I’d like to hope a man might be moved by this drama as fully as a woman might be.”

Jason Howard’s
“We All Live Downstream”

Howard, an environmental activist, edited this anthology that decries the dangers of mountaintop removal coal mining in Kentucky. The work contains a broad array of different voices, from well-known Kentucky natives like Ashley Judd and Bobbie Ann Mason to more obscure advocates like a fifth-grader who vows to fight mountaintop removal until he is “laid in the ground.”

Howard’s masterstroke is to make the work multi-genre; we don’t just get editorials and op-ed pieces, but poems, stories, essays, articles and anything else he has found on the issue. He writes movingly in the book’s introduction about the 1,200 miles of streams that have been buried by mountaintop removal, as well as the explosive equivalent of 58 Hiroshima-sized atomic bombs detonated by the coal industry in the region each year.

“Many think of it as a local issue, but everyone in this country is affected by mountaintop coal removal,” Howard says. “When someone turns on a light switch in Washington state, it affects someone in eastern Kentucky. I hope people will read this and hold elected officials accountable for environmental issues.”

Catherine Fosl & Tracy K’Meyer’s
“Freedom on the Border: An Oral History of the Civil Rights Movement in Kentucky”

Fosl and K’Meyer edited this work comprising interviews from the Kentucky Civil Rights Oral History Project, initiated by the state to research how the Civil Rights movement developed in Kentucky. History buffs are in for a treat, as the book, which compiles material taken from more than 100 interview subjects, provides a vivid and detailed description of a bygone era.

Fosl, an associate professor at the University of Louisville, admits the extensively researched project was difficult to whittle down into one book, but hopes it will motivate more scholarship on the subject.

“There was a dearth of scholarship on this subject before our project, and hopefully this book goes a long way to addressing that,” Fosl says, “but there are a lot of subjects here that warrant a book of their own. Hopefully scholars will pick up the ball and run with it.”