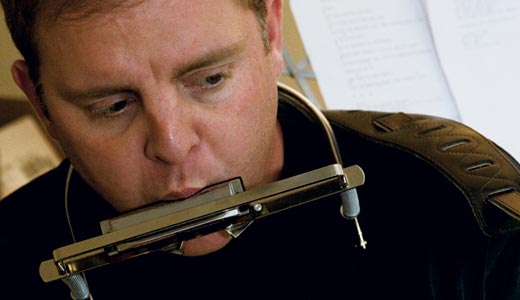 While listening to Lazy Bones, the new album from The Mack, I can’t help wondering whether these are solemn tales from the down-and-out or the raving wails of a mad man.

“In the same way as you have movies out there that are dark and twisted or whatever, it’s not the real world,” The Mack mastermind, Jeff Shelton, assures me. “But it in some way reflects things in the real world that are messed up or not right. [Music’s] a place for that stuff to safely exist … but still exist without pretending [it] isn’t out there.”

Shelton hails from Ashland, Ky., and takes his name not from hip-hop cliché but somewhere much more personal. “It’s a middle name that’s in my family,” he says. “I don’t have the middle name, but my granddad and my daddy had it, so I took it from them.”

His father is not only a namesake of the band, he also helped steer young Jeff’s musical taste. “My dad listened to a lot of Bruce Springsteen, he had Cat Stevens records and stuff like that,” Shelton recalls. “It wasn’t until I got to high school and college that I started really exploring different kinds of music.”

The results are ominous dirges that play out like cross-genre banter — rural folk tales mixed with old-fashioned country arrangements, set atop bouncing, jazzy rhythms. While the ghosts of Shelton’s childhood reside in east Kentucky, he recognizes that his musical enthusiasm elevated upon moving to Louisville.

“There was no real music culture growing up,” he says of Ashland. “Like, in high school, you never heard of anyone having bands. I was always really interested, but there weren’t a lot of people around me doing it. I had no idea about the independent side of music. It wasn’t until I moved to Louisville that I really got exposed to all of that.”

When he’s not playing musical narrator for a post-apocalyptic Appalachia, Shelton is melding young minds as a local elementary school teacher.

“The kids I work with respond so well to music,” he says, and in effect argues against stripping music from public school curriculums. “It’s almost like it’s a part of them that they keep separate from school, but it’s still really strong to their identity. The way that they can remember all the words to an album full of songs, but at the same time, they can be real behind in reading; it’s a weird phenomenon.

“I like to share music with them,” he continues. “Some of the things they’re exposed to, I’m not exposed to, so I feel like I gain a lot of insight.”