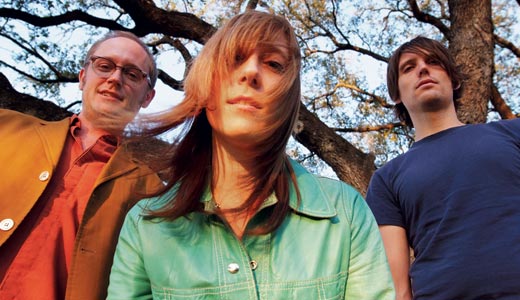 Pausing along their way to a Virginia date the following day, the quartet asked to flip on a TV, saw their national television debut and celebrated their good fortune by throwing back shots with the bartender and fellow patrons.

“It was very surreal,” Bastards vocalist/guitarist/pianist Erika Wennerstrom says of the group’s first brush with fame.

“The Late Show” gig touched only the tip of the Bastards’ iceberg. Formed six years ago in Cincinnati, their skyward trek has been impressive. They’ve crisscrossed the states many times, are steadily building a fanbase in Europe and have produced three solid efforts for cult Mississippi label Fat Possum. Their audiences are growing more diverse thanks to opening slots with Lucinda Williams, Wilco and The Gaslight Anthem. Monday’s Headliners show will be alongside Rilo Kiley chanteuse Jenny Lewis. Within the next month and a half, they’ll share stages with The Decemberists and The Avett Brothers.

The Bastards’ sound is powerful but not impenetrable: They’ve even meshed amicably with Kansas bluegrass act Split Lip Rayfield. “Even if the music was different from the bands we’ve toured with, you’ve got to give people credit for liking different types of music,” Wennerstrom says. “It’s a mix of genres, but those fans are fans of music in general.”

The material that has earned the group these accolades is a rustic, blues-influenced, garage-rock sprawl that winds through choruses to reach gratifying instrumental apexes. Their seasoned skills have come from experience: Comparing 2006’s All This Time with February’s The Mountain shows the outfit moving from organic and straightforward structures to lofty terrain built out of erupting instrumentals and thunderbolts of vast voice. Their Ohio origins have led to many finding a quick resemblance to Akron act The Black Keys — an acceptable turn of events, considering it was Keys drummer Patrick Carney who caught them performing and introduced them to Fat Possum.

Wennerstrom is the core Bastard. Growing up in Dayton, she started writing songs on piano before she was 10. However, it took until she was 18 to display her vocal range. “I’ve always wanted to sing since I was a little kid,” she says. “I don’t know what drew me to it.”

Her guitar skills developed to counteract her stage fright: The instrument gave her fingers something to focus on.

Her voice is equally adept at ranting in an amiable drawl, warbling with vulnerability and quaking with an uncontrollable power. What makes it distinct is its low, gritty timbre — something that has surprised first-time listeners who assumed her voice was a man’s. Is this kind of candor insult or approval? “I guess I take it as a compliment,” she says, citing Nina Simone, PJ Harvey and Joan Jett as some of her favorite singers. “I tend to like lower voices whether they’re women or men.”

Having recently moved to Austin, Wennerstrom and company are committed to focusing on the project’s growth. “We’ve always had a sound that is Heartless, but each album’s different enough to have its own identity,” she says, noting the bluegrass equipment and pedal steel guitar that made their kinks in The Mountain. “I just want to keep on experimenting and trying different things.”