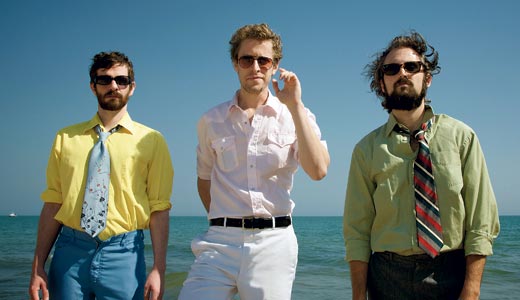 Hustle Beach is the new album from Chicago’s Baby Teeth, and it’s a mashup with Van Halen circa 1984 keyboards, an iota of kitsch and the quirkiness of Talking Heads. Turns out Abraham Levitan, whose last name could refer to a type of lotion at CVS, is from this burg, so we chat. So, Abraham …

LEO: Have you ever had teeth pulled?
Abraham Levitan: Wisdom teeth only. My mom took me out right afterward for a milkshake, which I promptly dumped all over the right side of my face. (Because I couldn’t feel anything.)

LEO: Hustle Beach: Tweaked southern Cali reference or utopian surf hangout?
AL: It’s a tweak of Muscle Beach in California. Also sort of influenced by the Ian McEwan book, “On Chesil Beach,” which I didn’t read but which intrigued me phonetically. Hustle Beach is a place where people don’t do any beach-like relaxation at all, but instead work even harder than they would at a 9-to-5 job. Sometimes that’s what being in a band feels like.

LEO: My roommate keeps convincing me that Steely Dan is amazing. I’m skeptical. Your take?
AL: They’re amazing. Although the first time I heard Steely Dan, I thought they were super-lame, so I can see where you’re coming from. Keep on pushing.

LEO: Why did you drop your long-held pseudonym, “Pearly Sweets”?
AL: I think that my having a pseudonym got the band off on the wrong foot as far as perception is concerned. It’s easier for people to listen to the music and form their own judgments if there isn’t a big clunky pseudonym hanging around and winking at everybody.

LEO: Your MySpace has a link that says “Baby Teeth on Pasta Primavera.” I’m getting a visual …
AL: Yeah, we should change the wording of that — that image sounds totally barf-a-riffic.

LEO: Any plans for a hometown show?
AL:We’re trying hard to come up with a good Louisville show. Hopefully with Peter Searcy, since my friend Adam plays bass for him. Last time we played Louisville, the audience was limited pretty much to members of my mom’s book club, so we’re hoping for slightly more of a breakthrough next time around.