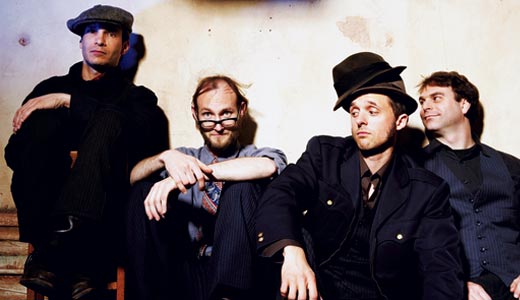 The Wiyos take their name from a 19th century street gang.

One of the token groups in the resurgence of traditional American music, The Wiyos are enjoying the synchronous arrival of hard-earned recognition. They join the Bob Dylan/Willie Nelson/John Mellencamp 2009 for 28 dates on the power trio’s summer tour, and have been featured in the BBC documentary “Folk America: Hollerers, Stompers and Old Time Ramblers.” All comes as they drop their fourth album, Broken Land Bell.

Bell cross-pollinates with NYC beat-boxer Adam Matta and circus/theater composer Sxip Shirey, blended with the band’s affinity for ’30s and ’40s country blues and western swing. Parrish Ellis, who plays National resophonic guitar, archtop guitar, banjo and ukulele, says, “We’re real expansive, all across the board. We’re heavily influenced by the Washboard Rhythm Kings from the late ’20s through the early ’40s.”

While their previous releases relied heavily on covers, Bell is The Wiyos’ first collection of all originals.

The Wiyos take their name from a street gang that dominated Manhattan’s Lower East Side during the 1800s. The name Brooklyn is derived from the words “broken land,” used by the first Dutch settlers of New York in the 1600s. The album title Broken Land Bell is a metaphor for our current economic state, a tip of the hat to how far we’ve sunk, and a look toward the future with small glimmers of hope.

Music ’Cast
Ryan Rollins and Jeremy Perry have launched their own record label, Jangle & Roar, and the label comes out swinging with the release of The Deloreans’ Love Outrageous, and the forthcoming album by The Genius File, Some New Invention. Listen at Bluegrass Catastrophe, bluecat.leoweekly.com.