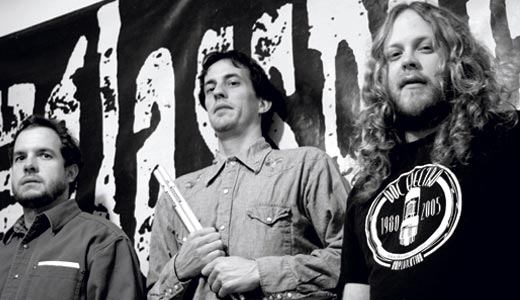 Each download comes with photos and tour poster files, two unfinished and unreleased tracks, “Slut” and “3,000 Sleeping Pills,” and The Pack’s first-ever recording, “The Polaris Demo.” Check poisontreerecords.com or myspace.com/kentuckymotherfuckers.

A, plus
Straight A’s (ex-Kangaroo, Ever-Constant Sea) have a new 7-inch single out on marble vinyl via Noise Pollution. The A’s will have records for sale at their July 25 gig at The Brick House (1101 S. Second St., brickhouse.cc). Meanwhile, Noise Pollution reissues Evergreen’s 21-song compendium Wholeness Of The Soul on Sept. 5 at Pour Haus. The show features Troy Cox and Dave Pollard, of the original lineup, with Sean Roberts and Greg Livingston.

Total Request Love
Young Widows’ latest series of split 7-inches are now available at Temporary Residence Limited, a venture worth supporting because TRL head Jeremy Devine is a homeboy who puts out seriously good stuff. The third and fourth YW splits pair the band with Pelican and My Disco. Each pressing is capped at 2,000 copies, and the artwork from each of the four singles fits together as a puzzle. The Widows play July 11 at Lisa’s Oak St. Lounge. TRL also has a stunning seven-LP box set, Life Through Bombardment, by Matthew Cooper, aka Eluvium. Peek at www.temporaryresidence.com.