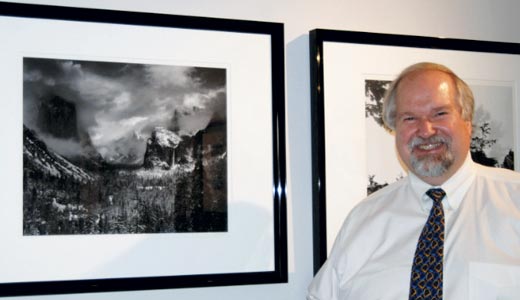 Majestic landscapes + Yosemite National Park + photography = Ansel Adams. There is no other photographer who quite adds up.

Adams lived on the edges of Yosemite from 1937-47, making a series of iconic images that, to this day, equate him with the best of 20th century landscape photographers.

“Clearing Winter Storm” was shot in December at New Inspiration Point with its great view of Yosemite Valley. Adams, ever the patient photographer, visualized the scene he wanted, and then waited.

The rain and show began to depart. Gray rain clouds overlapped white ones. A thin ribbon of water poured against vertical walls of stone engulfed by clouds. The resulting image is quintessential Adams, making viewers feel they are but dwarfs in a land of giants.

“Who can define the moods of the wild places,” Adams wrote, “the meanings of nature in domains beyond those of material use? Here are the worlds of experience beyond the world of the aggressive man, beyond history and beyond science. The moods and qualities of nature and the revelations of great art are equally difficult to define; we can grasp them only in the depths of our perceptive spirit.”

It makes sense he was also an environmentalist. He served 37 years on the board of directors of the Sierra Club.

“I bought ‘Clearing Winter Storm’ on my first foray into serious collecting, at Christie’s in New York City in 1990,” says Paul Paletti. “I had discovered the year before that photographs I had bought while in college 15 years earlier (including two 8×10 Ansel Adams photos) were worth at least 10 times what I had paid for them. This must be a great investment. And one I enjoyed.”

The Adams photograph is included in “The Big Guns” exhibition organized by Paletti in the gallery that bears his name. It is part of the first Louisville Visual Arts Festival (Paletti had his hand in that, too), a series of exhibitions based on the Center for Photographic Studies that existed here in the 1970s. One of the objectives of the Center, coupled with the Speed Art Museum, was to bring world-class photographers in Louisville.

Paletti’s exhibition consists of some of those master artists. And big guns they are. The exhibition has photographs by Jerry Uelsmann, W. Eugene Smith and Judy Dater, including her famous image “Imogen and Twinka,” featuring another famous photographer, Imogen Cunningham, with model Twinka Thiebaud.

After receiving a large sum of money, Paletti decided to go big time. “I ran off to the art auctions at Christie’s and Sotheby’s in New York and came back with five photographs. ‘Clearing Winter Storm’ was my first and biggest purchase … I knew I wanted and could afford one major piece, and spent two days before the auctions in NYC looking at all the auction lots, researching past sale prices and planning my buying strategy.

“I have never regretted buying it,” he says. “I have literally enjoyed it every day, and despite ups and down in the art market, it is worth about six times what I paid for it. And after the recent economic disasters, I feel even better about buying photographs. The Ansel Adams prints will always be beautiful.”