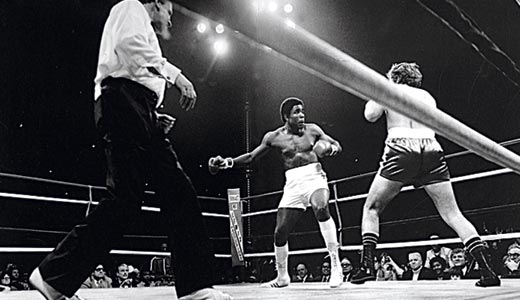 “I photograph first and think later.”

This simple statement, found on a placard at the exhibit, is evident to anyone who views his work: The late photographer John Ranard did not create art. He found it.

The John Ranard Memorial exhibition, at the Cressman Center for Visual Arts through July 11, features a vast array of the photographer’s work. From a photo of KFC founder Colonel Sanders lying in his casket, outfitted in his iconic garb, to blurry images taken with a cell phone, it is evident that Ranard sought to capture a multifaceted aesthetic of whatever culture he was immersed in at the time. Born in Washington State, his father’s job as a Foreign Service Officer in the State Department took their family abroad. It was not until high school that he returned to the U.S.

“When he came to America to finish high school, America was a strange and wonderful place to him,” says Bill Carner, Ranard’s longtime friend and photo wrangler in the Special Collections Photographic Archives at U of L’s Ekstrom Library. “He hadn’t seen anything quite like it. I think that really kind of informed his vision. As a photographer, he really had a fresh look at American culture, and so he was really immersed in it and wanted to record it.”

Ranard was by no means a niche photographer. The photos in the exhibit vary from Russian criminals with homemade tattoos to scantily clad tweens at a wedding. Ranard’s friends and admirers credit his artistic diversity to his ability to “fit in” in any situation.

“To look at these pictures, it’s like John was the invisible man,” Carner says. “He’s just in there photographing them, and he’s completely forgotten by the subjects. He was really good at that. He was really good at just making people feel comfortable with him and just kind of going on their business and not thinking about this Bob Dylan-looking guy in the corner photographing them. You would think he would be the odd man out, but he wasn’t. He really didn’t make people nervous or scared. They knew they could trust him. He was very honest in his photographs and in his life.”

Bruce Linn, assistant director of galleries at U of L’s Hite Art Institute, echoes this sentiment. “From looking at the work … he seemed to have kind of an uncanny way of mingling with all kinds of different groups without upsetting them,” he says.

Ranard came to Louisville in 1977, after using an insurance settlement he received from a car accident to attend C.J. Pressma’s Center for Photographic Studies. He contributed his work to former alternative Louisville publications City Paper and Louisville Today. In 1987, he achieved marginal mainstream success when his photography was featured in Joyce Carol Oates’s book “On Boxing.” Oates had only positive things to say about the collaboration and his work overall.

“They’re very poetic,” she said in an interview published in his Washington Post obituary. “They’re the highest kind of journalism, where it passes into art. They’re very unpretentious.”

He continued taking photographs throughout his life, even going to Russia in his 40s to document the country’s drug culture and subsequent rise in HIV. One of his last major projects was a series entitled “On Every Corner,” in which he documented race and class relations, as well as small churches, in Louisville’s West End.

Ranard died May 14, 2008, at age 56, after a long struggle with liver cancer. There will be a memorial service for Ranard featuring a slideshow on his life presented by friends and family during the First Friday Trolley Hop July 3.

Carner maintains that he never really improved as much as he was just consistently excellent. “His technique was good, his eye was good, and it just got better,” he says. “It wasn’t so much that he made more good pictures; he just didn’t make as many bad pictures.”