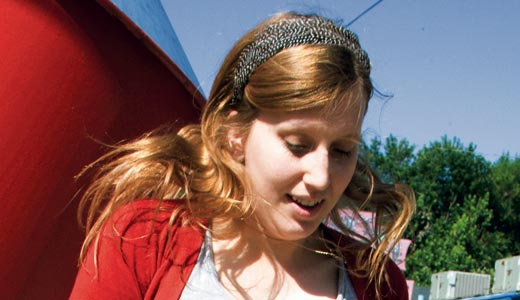 The pulsing vein of Shannon Kempf’s body of work is the small, golden-framed cross-stitch of two My Little Ponies — humping.

What first appears to be a thrift-store find, perhaps a practice subject for someone’s grandma, is actually a carefully crafted representation of the moment of bliss for the adolescent Ponies, one piled atop the other in a primal state of lust.

From exploitative kitschy images of My Little Ponies and Barbies to graphic illustrations of golden showers, unusual juxtapositions turn Kempf on.

Sweet and upbeat in person, and topped with long blonde hair and a warm, charming smile, Kempf strikes a contrast to the stories of her late-night drunken escapades and a mind preoccupied with sex. But her enthusiasm for sensational art becomes clear as we discuss her love of nudes and her artistic influences, some of which could be taken as pornographic.

Kempf says, in essence, she does what she likes. Seeking inspiration for a painting class at the University of Louisville, Kempf turned to Barbie Dolls in place of live models. The overly feminized dolls lent themselves to sexual positions.

“They are these hypersexual beings for a child’s toy,” she says. “They have their long, luscious hair, their giant boobs and little waists. It’s kind of ridiculous.”

The bright backgrounds and central figures in her art draw attention to the nude dolls and their unexpected roles. Unlike typical nude art, the taboo of associating children’s toys and sex makes the subject matter atypical and sensational.

Even in pieces featuring individuals — the portrait of Britney Spears as the unsuitable symbol of virginity, for instance — sex and sexuality bubble to the surface.

Extending the theme, Kempf added doll joints to human figures posed in scenes of Greek mythology. Whether it was the reuniting of Agamemnon and Clytemnestra, Circe’s enchantment of Odysseus or the Sirens on the rock — they’re all scenes with an intense sexual energy that play well with the updated pop culture sexuality. By interjecting the doll joints into the picture, Kempf combines the idea of myth and play, as well as the taboo nature of sexualizing children’s toys. Her painterly quality lends itself to her work — using a bright palette of oil paints, she intensifies the passionate scenes.

Kempf started with illustrated silkscreen prints of My Little Ponies with contemporary emblems. Replacing the cutesy hearts, rainbows and butterflies with guns, headphones and skulls, the updated dolls align more with her age group (she’s 26). The brightly colored prints, however, still sparkled with the theme of My Little Ponies.

Like Barbie Dolls, My Little Ponies have an underlying sensuality that has become more prominent in the recent manufacturing of the toys. When comparing the dolls over time, what used to be brightly colored ponies now have more slanted eyes, exaggerated curves and long, flowing hair — characteristics that are less than subtle references to the sensual decoration of Barbies, Playboy models and — going darker — sex workers.

“I like the idea of taking an old grandma hobby and amping it up a little bit,” she says.

Her last show at The Makery branched off in a new direction. Taking the idea of taxidermy to the pretty ponies, Kempf stripped the dolls of their glitz and glamour and mounted them like hunted animals. Making plastered molds, then sanding and painting each one by hand, she created a collection of mini pony heads mounted on dark, wooden plaques. The project was fully reminiscent of a gentlemen’s club, complete with stark, white pony heads as the prize of masculine dominion.

Decontextualizing is among the various themes Kempf is pursuing. Inspired by a friend’s “Joy of Gay Sex” book, she adapted the “golden shower” illustration that depicted two men urinating on one another, drawing it on a large, clear shower curtain. She plans on using these taboo images in a fun, functional way, and is hoping to enlist friends to pose for original images that can be used on shower curtains, bed sheets and other subtly sexual household objects.