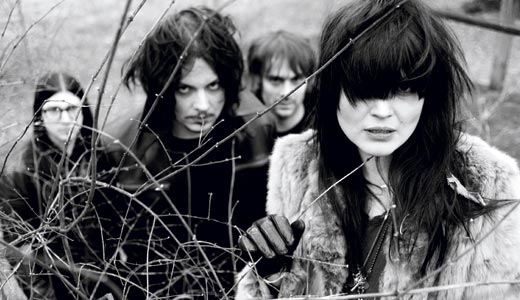 Alison Mosshart has played both vixen and victim as the singing half of The Kills. Now she’s stepping out on her duo, in a vital role for Jack White’s newest band. Unlike The White Stripes and The Raconteurs, new foursome The Dead Weather, which play City Block on Thursday, places White in the background.

Well, sort of. How could you keep him behind the drumkit? The answer, in the case of The Dead Weather, is to have a singer with the presence to grab and hold center stage. That’s where Mosshart comes in.

You also have to have a guitarist who’ll maintain control of his role, and for this all-star ensemble, it’s Dean Fertita, from Queens of the Stone Age. (Kentuckian Jack Lawrence, who also plays in The Raconteurs, is bassist.) With these roles cast, the group’s most prominent member sings sometimes and occasionally steps up front with guitar in hand, but otherwise he’s content to reveal his inner John Bonham.

At small, introduce-the-band gigs in NYC and Nashville earlier this year, Mosshart was indeed a balancing presence to White in sharply spun updates of the cacophonous hard rock that fought off disco and punk to reign over the late ’70s. There’s more than just grinding and lurching going on in this blues-rock, though, as can be heard in early release tracks like a cover of Gary Numan’s “Are Friends Electric?” “Treat Me Like Your Mother” has segments sung bitingly by Mosshart and White, like they’re different war correspondents filing reports from the relationship battlefront.

It was a surprise that The Dead Weather kept a place for Louisville in June, as their debut disc Horehound’s release and the beginning of a formal tour are both more than a month out. The many fans of Jack White’s many ventures were anxious about whether City Block’s sputtering demise would sink the gig.

LEO got to speak with Alison Mosshart a few days back, while she was in London recovering from a broken nose suffered onstage. She emphasizes that The Dead Weather is a foursome of musicians with complementary skills and not merely a Jack White side project — though her admiration for her drummer is clear: “The man has about 2 million ideas per minute. It’s fascinating to be around. Hopefully, it does rub off on me. Loads.” And it was White who first suggested collaboration, as she relates:
Alison Mosshart: The Kills toured with The Raconteurs. At the end of the tour, I just kinda hopped on their bus and went to Nashville for 24 hours. Jack said, “Oh, just come and record a 7-inch.” I guess we had so much fun … because a couple of months later he called me and I went back.

LEO: You like shooting guns? What’s your favorite?
AM: I’ve only shot guns once, but it became my favorite thing ever to do. I shot a bunch of handguns, which names I forget. And a machine gun, and I think that was the most fun — it was pretty amazing.

LEO: You recently went back to Nashville. Was that to add more that’ll be on the record, or is it something for the future?
AM: [Horehound] was pretty much finished. I went back and did some vocals — ’cause some of them were scratch vocals, so I did some normal ones. And then we did a few covers and did all the artwork for the 7-inches. And shot some guns, and went to the record plant and got the records pressed … we did all kinds of stuff.

LEO: With The Kills, you’re half the group. But with The Dead Weather, it’s a bigger ensemble. How do you handle the different roles? Were you more relaxed?
AM: I think it’s probably more pressure because instead of having one person to sing to and play to … with two people, it’s very intimate. You spend that time together onstage as just two people and it’s quite intense. I’ve only played a couple of Dead Weather shows, but it was like I didn’t know where to look! It’s a really different feeling, like being a frontperson — which I haven’t experienced in 10 years.

LEO: Those shows … you were all in black. The artwork’s really stark. Is the look of the group planned out? How are the group meetings? I’m wondering if Jack White had a lot of ideas and you guys got to hear those and then chimed in.
AM: Rob Jones [who also works with The White Stripes] did most of the artwork. He listened to the record and he asked for ideas. The only thing that Jack said was that he didn’t want any red in it. Obviously, there’s no red. That was the only specification — everything else came from us and the things that we’re into and the things that we experienced while we were hanging out working the record. It’s been a group effort.

LEO: How did Louisville get lucky enough to have a prominent spot in your early gigs?
AM: I have no idea. The original conversation was that we wanted to do a really tiny tour of the South, in a van. Pretty immediately that all got blown out of the water: Suddenly, there’s us on the cover of Spin. Maybe Louisville is a kind of moment of that dream we had of being in a van together, driving ourselves. We’re just going to try and play some smaller shows, for a minute, if we can — because it’ll be really, really fun.