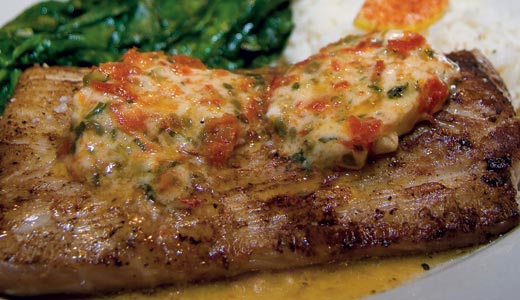 Everybody loves a parade? Maybe. Let’s say that most people love most parades. But the procession of broken dreams that has recently passed through the St. Matthews space that once was home to Rick’s? That’s a parade not so easy to enjoy.

For the historical record, let’s retrace the genealogy of this spot that once housed the offices of the then-Voice of St. Matthews: Rick Dissell established the original Rick’s around 1980, and earned his popularity the old-fashioned way, with a 17-year run in that location.

He moved out in 1997 to try the business in new quarters a few blocks away, facing Lexington Road. At that point, the estimable Merzhad Sharbaiani moved into the Chenoweth Square location, opening Indigo Bistro, a classy operation that lasted until he moved out to Hurstbourne to make his mark with Z’s Oyster Bar and Steakhouse (and, more recently, Z’s Fusion downtown).

Still with us? A Cincinnati firm turned over Indigo, took it downscale, and it soon closed. At that point, Dissell, who had pulled Rick’s out of the Lexington Road location to start Blue Parrot on North Hurstbourne Parkway (which soon gave way to Limestone), returned to Chenoweth Square with Rick’s Ferrari Grille. As he usually does, he seemed to get it right, and the new Rick’s thrived for several years until the peripatetic Dissell moved again, this time out to Prospect, where he is now holding court, and winning praise, at Blackstone Grill.

Got all that straight? Here’s where things start getting ugly. Within the past year or so, we’ve seen three similar spots move through this location: Wigginton’s lasted only a few months before changing its name (perhaps out of embarrassment), and its successor under the same management, Gilman’s Pointe, was even more short-lived. Its bar drew huge crowds, especially on trivia nights, but diners learned to stay well away from the dining room. When we dropped by one night, we were the only couple occupying the entire substantial space. Our meal, lackluster at best, easily explained why.

It was almost a relief when Gilman’s Pointe slouched to its demise and restaurateur Bob Wathen, whose family owns the Wathen’s brand of small-batch bourbon, moved in recently. The restaurant pretty much had no place to go but up, and management’s attitude seemed right.

“The restaurant is under new ownership and management,” Wathen’s House Manager Judy Pocker wrote in an e-mail. “We are aware that the last management operating under Gilman’s Pointe, and prior to that Wigginton’s [same owners], were not doing a great job. We have heard many complaints. We, however, plan to succeed with a completely new approach regarding food and service. The entire place has been redecorated inside and outside. We have a wonderful patio in the front and are building one in the back as well. We have live music four nights a week, Wednesday-Saturday.”

Sounds good to me. I’d love to see this place succeed, as I’ve enjoyed dining in this comfortable space back through the Indigo days to the original Rick’s.

We summoned our friends Bob and Sharon — making a foursome so we could try more dishes — and headed over to Wathen’s on a mild spring evening. The results? Pretty good. A definite “A” for the casually stylish setting and for attentive service (almost attentive enough to make me wonder if I had been recognized as a dining critic).

Make it a solid “C” to “A-” for the fare of Executive Chef Cory Givan (formerly sous chef at Le Relais, who’s also put in kitchen time at Louisville Country Club and Wild Eggs), whose dishes ranged for us from OK to pretty good to quite good indeed. A solid start, making the reasonable case that experience will continue on an uphill trail.

We couldn’t see major changes in the decor, which has remained essentially the same since the original Rick’s: large, lighted fish tanks in the walls, mirrors and sconces and an overall comfortable feel. A big, welcoming bar with plenty of flat-screen televisions. A popular, shady patio out front (which, like just about every restaurant patio in town these days, serves as the de facto smoking section). Some construction appears to be going on there, and I’m told another patio is coming at the rear for summer.

The menu features steaks, seafood and pasta dishes. Unfortunately, Sharon is a vegetarian, mostly, and couldn’t find a meatless item on the menu beyond the salad section. She’ll eat fish in a pinch, though, and settled on mahi mahi. Still, in today’s market, just about every upscale restaurant I can think of carries one or more vegetarian mains — often good enough to attract carnivores. I’d mark this as a lapse at Wathen’s.

Appetizers shared around the table hit the spot. Blue mussels were perfect, a sizable bowl as good as those we enjoyed at 732 Social (LEO Weekly, May 13). The portion was more than generous, and the spiced persillade broth was good enough to prompt us to use crusty bread to soak up the last drops. A cup of french onion soup ($4) was the real deal, dark brown and deeply sweet with long-cooked, caramelized onions, topped with the traditional bread crouton and a ration of mild, molten cheese that seemed more like mozzarella than the traditional Gruyère. Kentucky fried green tomatoes were tangy and crisp, topped with plenty of a sweet roasted corn relish that added an unexpected dimension to the down-home dish.

Main courses were generally good but not quite at the stunning level. Carol’s mahi mahi was a good-size portion, pan-seared and flaky. She found it a bit on the “fishy” side, although it should be noted that mahi mahi by nature is a more flavorful fish than, say, sole or scrod.

Bob went with the King Louis Creole Pasta ($15), a generous bowl of long pasta studded with a land-and-sea mix of mild andouille sausage slices and shrimp, with diced tomatoes and green bell peppers in a sweet chili cream.

Mary chose the marinated rib eye, a dish that predecessor Gilman’s Pointe had ruined. Wathen’s did better, but sadly, it still fell short of the mark. A thin cut, it was a bit gristly. Ordered medium-rare, it came out cold and raw at the center. She sent it back for more skillet time and, while they were at it, requested that the sweet barbecue-style sauce be removed. It came back wiped clean but still well short of medium-rare.

My choice, the Kentucky Hot Brown ($13), was, alas, the clunker of the session. Built on bland grocery-store white bread, it featured decent white turkey meat, was sauced with a simple, rather mild white-cheddar Mornay sauce and topped by two slices of excellent bacon. It would have been a much finer Hot Brown with better bread, a little spice or more flavorful cheese in the sauce, and for heaven’s sake, run it under the broiler next time! A side of sautéed spinach ($3) was first-rate.

Too full for dessert, we left generally satisfied, and the bill was very reasonable: Our share of dinner for four, including a couple of Sam Adams Boston Lagers, topped out at $64.50, and that attentive but professional service earned a $14.50 tip.