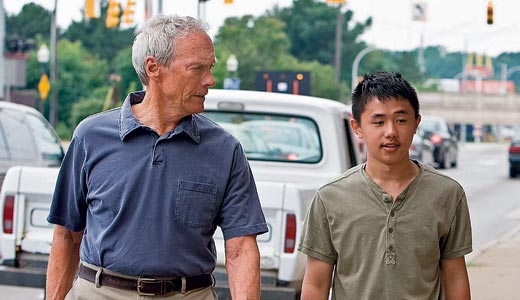 If all you know of Clint Eastwood is his more recent, artsy, “Midnight in the Garden” work … hold onto your shorts! This is Eastwood doing what he does best: Taking a minor premise based on seemingly two-dimensional characters and turning it into an engrossing slice-of-life that will leave you breathless. He’s a grumpy and dangerous Korean War vet, riled to anger by Hmong immigrants moving into his neighborhood — then one of them steals his car. You expect him to go on a killing spree, but he turns the anger inward and sets out to reform the teen, ultimately learning a powerful lesson himself. Wonderful.

We are convinced that Harrison Ford suffered a stroke sometime before the making of the last (hopefully!) Indiana Jones movie. Kinda slow. Here, however, he’s back front-and-center, proving that — while not as quick as he once was — he’s still a damned good actor when given age-appropriate material to work with. Besides, how can he go wrong with co-stars like Ashley Judd, Sean Penn and Ray Liotta?! He’s an immigration agent, trying to find a missing illegal whose disappearance seems to be far too convenient for his bureaucratic higher-ups. Worth checking out.

This harmless latter-day “Porkies” features a pair of hunks (Nicholas D’Agosto, Eric Christian Olsen) who ditch football camp to weasel into cheerleader camp in hopes of scoring with the scores of blonde-and-bubbly bouncing hotties. And with the likes of Sarah Roemer, AnnaLynne McCord and Murray, Ky.’s own Molly Sims on the screen, you’ll be cheering them on! Big dumb fun.

We love Luc Besson movies, and this high-def documentary look at our planet proves why. An aerial survey of 54 countries showing how the earth has been affected — both for the good and the bad — by man’s few scant centuries of inhabitation. Narrated by Glenn Close, but don’t let that stop you.

A damned fun look at Hollywood’s love affair with cross-dressing from the Starz Channel. With terrific clips from “Some Like It Hot” (one of the funniest moves ever made!), most every John Waters flick, “Mrs. Doubtfire,” “The Rocky Horror Picture Show” and lots of Ed Wood Jr. offerings, this is a real hoot.

If you see only one dark-humored Latin computer-hacker action-thriller this week, make it this one! Diego Luna stars as a geek who gets embroiled with Russian mobsters trying to access a Swiss bank account. The scheme goes down the crapper, of course, leading his friends, family, neighbors — and a certain attractive woman he’s been stalking — into a dangerous confrontation.

SHAUN THE SHEEP: SHEEP ON THE LOOSE

What can we say? If you haven’t seen one of these international-hit kid-vids from the Wallace and Gromit guys, you’re missing one of the best things on TV. Six episodes plus a nice behind-the-scenes featurette for, like, 2 bucks each. Best bargain in town.

If you remember the first-person shooter vidgame “SiN,” then you might like this short (under one hour) anime based on the exploits of Col. John Blade. Here he takes on genetic monstrosities and the far more dangerous humans behind their creation.

Clive Owen is on screen nearly every second of this two-hour globe-hopping corruption-and-murder thriller. He’s an Interpol agent trying to take down the world’s largest bank with the help of Naomi Watts (who does little but look good and run) for funding terrorists, murder and mayhem throughout the world.

There have been a lot of teen vampire flicks lately, but this little Latino gem is by far our favorite. A sour, unhappy 18-year-old guy discovers a forgotten, undead vampire queen buried in the desert. He helps resuscitate her and they fall in love, but what can he do when her recovery begins to take its toll on his family and schoolmates? Sexy, fun, comic and scary — what more could you possibly want in a movie?

The complete first seasons “All in the Family,” “Good Times” (with Jimmy J.J. Walker), “The Jeffersons,” “Maude,” “One Day at a Time” (with hot little Valerie Bertinelli), the incomparable “Sanford & Son” and, best of all, “Mary Hartman, Mary Hartman.” Comes with two full discs of special bonus material.

WOODSTOCK: 3 DAYS OF PEACE AND MUSIC

It’s amazing that we’ve never written a review of this, considering that we watch it obsessively several times a year. Simply put: 1969 was the pinnacle of human civilization. Man stepped on the moon, a war had been stopped with flowers and poetry, and, in the little town of Bethel, N.Y., half a million people came together in the greatest musical/social event in history. A muddy, disorganized, drug-fueled orgy unlike anything the world had ever seen, it was our final birthday party, the end of America’s childhood. Now available in several forms, including a four-hour 40th Anniversary Blu-Ray Ultimate Director’s Cut, this Oscar-winning doc is a must-own. Check out The Who, Jimi Hendrix, Santana and hundreds of their friends — including two new hours of never-before-seen performances by Joan Baez, Country Joe McDonald, Joe Cocker, Paul Butterfield, Creedence Clearwater Revival, The Grateful Dead, Johnny Winter and Mountain — plus hours of new commentary and interviews. Plan on taking next week off. Time well spent.

LAST OF THE SUMMER WINE: VINTAGE 1979

THE BEST OF WHOSE LINE IS IT ANYWAY?