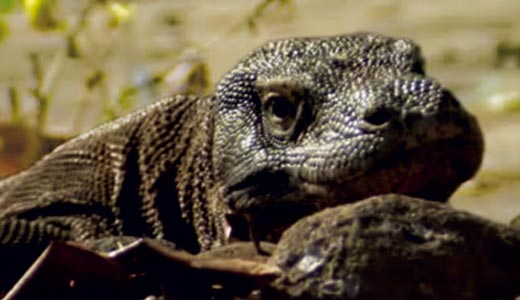 This Disney true-life outing is pretty cool, if a little shallow. Fifteen rookie sailors — young, rich, good-looking and athletic — endure six months of intense physical training in hopes of winning a spot on the crew of the sloop Morning Light as she competes in the Transpac Yacht Race, the world’s premier sailing event. Yeah, it’s a “reality” show, and one with Der Mouse’s usual flair for the mediocre. All that aside, it’s still a real, honest modern-day adventure that you’ll find yourself wishing you were part of.

Cable TV nature-doc that looks at the myths and surprising realities of dragons. Found in every culture on earth, their descriptions are surprisingly consistent, even among people who could not have shared their stories. How can that be? Were there real, fire-breathing dragons at one time? Could they still exist? Conservationist/reptile-nut Romulus Whitaker is an engaging host in this ’round-the-world trek to uncover the truth. Also includes his search for supersize crocs, 20-plus-foot monsters that truly exist … or have they just gone extinct? Great stuff.

DR. STRANGELOVE OR: HOW I LEARNED TO STOP WORRYING AND LOVE THE BOMB

Peter Sellers, George C. Scott and Slim Pickens join forces with director Stanley Kubrick to make the ultimate anti-war movie. Sellers was originally supposed to ride the A-bomb down in the movie’s now-iconic climax — yeeee haawwwww! — but he broke his leg, forcing Kubrick to hire Pickens as a replacement. This is the 45th anniversary Blu-Ray Edition of a cinema-comic masterpiece with all the requisite goodies.

A young hottie (Tania Raymonde, Alex from “Lost”) secretly hooks up with older men online in a bid to escape Goshen, Ind. (“We swear, Officer, we’re just here to buy some sirks!”) When she vanishes, only her best friend (ravishing Anna Kendrick from “Twilight”) suspects something is wrong and takes on the whole town to uncover her fate. Good stuff.

If you’re a fan of indie movies or mixed martial arts, you’ll get a kick out of this $11,000 wonder. Fighters form a club, each member with a signature ring. Any time two of them meet, they must fight, the winner receiving the rings of the loser. Toss in a group of pissed-off ninjas and you got yourself one helluva entertaining flick!

Jared “Supernatural” Padalecki leads an all-TV cast in this unnecessary rehash of the classic slasher-movie progenitor. If you stop watching them, they’ll stop making them.

A troubled man battles a sexy female demon (childlike nymph Axelle Cummings), but no matter how many times he kills her, she comes back to life to torment him again. A terrific no-budget indie horror that really delivers. Highly recommended.

RIFFTRAX: FROM THE STARS OF MYSTERY SCIENCE THEATER 3000!

The latest project from those wacky MST3K guys (Mike Nelson, Kevin Murphy and Bill Corbett). To avoid paying copyright on the movies they skewered, they recorded “Rifftrax”: web-based audio files that you could synch with your own DVD, thus adding their quips and skits real-time. This is their first full-DVD release, complete with movie and ready to play. As always, their riffs are fun, if a mixed bag, but we really miss seeing the bots in profile at the bottom of the screen. Now available: “Carnival of Souls,” “Little Shop of Horrors,” “Missile to the Moon,” two volumes of shorts and “Reefer Madness.”

The original “Cell” was a wildly imaginative visual juggernaut starring Jennifer Lopez as a researcher who dives into a serial killer’s crazed cranium to save his latest victim. This sequel doesn’t have that movie’s budget or talent, but it’s a fun outing if you don’t expect too much. With smokin’ Tessie Santiago in the Lopez role.

THE DIARY OF ANNE FRANK

First Blu-Ray release of the definitive “Anne Frank,” complete with tons of bonus goodies. Stars Millie Perkins as the Jewish scribbler hiding in the attic of Nazi-occupied Amsterdam, and Shelley Winters, who won an Oscar as Petronella Van Daan.

Unnecessary colorization of one of the best “adult” Oaters ever made — and the movie that gave us the modern boob! Doc Holiday and Billy the Kid (Jack Buetel and Walter Huston) feud over half-breed vixen Jane Russell. But what makes this movie special is that the director, engineering genius/nutjob Howard Hughes, wanted buxom Jane to be more “on display.” So he invented a special brassiere to move her mounds to the foreground, forever shaping our culture and coining the term “motorboatin’” in a single stroke. His revolutionary design is now the industry standard, restraining more modern bosoms than the FCC. God bless you, Howard Hughes! Includes a clean b&w copy, as God intended.

The 25th anniversary re-release of the original animated sensation. All 16 uncut episodes, now in digital stereo sound, complete with all the featurettes, vintage toy commercials, scripts and swag that any obsessed man-child could desire.

We are just plain tired of Tyler Perry. He seems to think all he has to do us put on a dress and imitate old characters from “Sanford and Son” and we’ll make him rich. Hell, nobody pays us a dime when WE do it! If you like him, here it is.

FOR THE UGLY AND UNWANTED: THIS IS GRINDCORE

THE HUNGER: THE COMPLETE FIRST SEASON