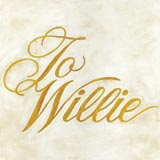 You know those couples who sit on the same side of the booth, who talk babytalk in public, who call each other “Ma” and “Pa,” who are a little too much in love? Phosphorescent’s To Willie is a musical experiment in such co-dependency. Matthew Houck doesn’t re-imagine Willie Nelson’s recordings as much as he puts them into his own voice, like hearing a friend’s story from a mutual friend. You miss Nelson’s lilting yodel-croon, which Houck consistently underplays. As a result, the joyous sorrow of Nelson in “I Gotta Get Drunk” becomes a hushed confession rather than a bacchanal acceptance of self-destruction. Still, Phosphorescent does some nice things on this record, mainly reworking the orchestration of Nelson’s songs, the delicious harmony of “It’s Not Supposed to be That Way,” and the choral addition to “Can I Sleep in Your Arms,” in particular. No matter what angle Houck takes, you can’t escape Nelson. And, like that obnoxiously in-love couple, when you bump into just one of the pair without the other one, you may feel a little shortchanged.