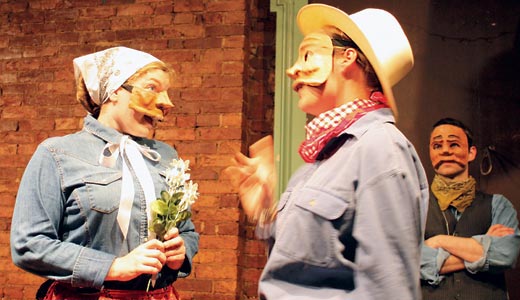 (Le Petomane Theatre Ensemble presents William Shakespeare’s “As You Like It,” June 4-6 at the Rudyard Kipling. Directed by Gregory Maupin and Abigail Bailey Maupin. For tickets, call 609-2520 or visit www.lepetomane.org.)

I’m ashamed to admit that last Thursday’s opening night of “As You Like It” was the first Le Petomane show I have seen. I am a coward. I confess their wacky promotions made me think of manic experiments heavy on enthusiasm but light on talent, of mandatory audience participation, of ill-advised improv. I am a jerk. When I saw the members of the ensemble perform at the Actors Theatre Late Seating, I knew I had misjudged. And now, thanks to their hilarious production of “As You Like It,” I am a believer.

So if you’ve never seen Le Petomane, for whatever reason, go see this show. Six well-trained actors using handcrafted masks, puppets, minimal costume changes and a Wild West set, bring a level of physicality and hilarity to Shakespearean comedy not often seen in Louisville. This cross-dressing pastoral romp isn’t known for its subtlety, and a troupe known for “putting the F in Art” doesn’t sound like a model of restraint, but this production’s strength lies in the collective’s choices to favor the small detail over the broad stroke.

Their use of Commedia dell’Arte-inspired masks to differentiate among the 20 characters highlights the artificiality of the stage performance without slipping into camp. And yet these choices are risks that pay off. As one performer using masks to play two characters in one scene, Tony Dingman deftly switches back and forth between Orlando, the fair-hearted, impoverished younger DeBoys brother, and oppressive older Oliver, instantly seen as evil thanks to his mask’s villainous mustache. How can one actor, playing two roles, put himself in a headlock? Thank the masks.

As Rosalind, the exiled daughter of a banished duke who steals Orlando’s heart and hides out in the Forest of Arden as a lady who looks like a dude, Heather Burns’s irrepressible charm shines through both of her masks. Gregory Maupin’s clown Touchstone is both a physical delight and a reality check, bringing the tone back down to earth when Rosalind and Orlando get a little too starry-eyed. Kristie Rolape and Kyle Ware are the workhorses of this production, playing at least five characters apiece, giving each a distinct voice and presence. Abigail Bailey Maupin’s exuberance as Celia, Rosalind’s cousin, is even funnier after we see her play Adam, Orlando’s faithful servant, as a tiny, whimsical puppet.

This show is set as theater in the surround, using two stages and as much of the space between tables and patrons as possible. The result is intimate, but never intrusive — a crucial distinction for a patron who dies a little death every time an actor runs up an aisle and into the audience. “Not me, not me,” I chant, and this mantra attracts actors like allergies attract house cats. No such problem at this show — Le Petomane keeps a respectful distance. With its sliding-scale admission and the laidback atmosphere of the Rud, a night with Le Petomane is immensely enjoyable. This troupe is one of Louisville’s prized little treasures. Believe it.