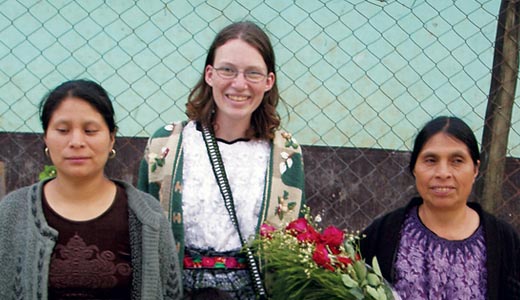 Looking for Lilith Theatre Company fills a vital role in our artistic community, allowing an array of women’s voices to be heard. “StrangersExtranjeras” is a project headed by two young women who served as volunteer Presbyterian missionaries and returned home determined to tell the stories of the Guatemalan women they worked and lived with. From those experiences, Jennifer Thalman Kepler and Charity Thompson created this bilingual play about personal transformation and women’s relationships.

Kepler and Thompson’s composite experiences became the story of Anna (Ashley Rose Stallings), a naïve college grad given to enthusiastic soliloquies who enlists with her church to spend a year in a remote Guatemalan village. Her hostess is Lydia (Jaycee Padilla), a mother of two. Though Anna and Lydia are the same age, their different cultures and language barriers make them ill-equipped to communicate with one another at first. Padilla’s deadpan delivery and comedic timing make Lydia’s efforts to educate wide-eyed Anna both funny and touching. Though Anna is privileged in ways Lydia can’t even imagine, Lydia’s life experiences cast her in the teaching role.

It’s important to know that Looking for Lilith uses the play-building method of devising, a collaborative process that involves the entire ensemble in the creation of an original play. Devising, used in conjunction with their mission to re-examine history through women’s perspectives and bring women’s voices to a wider audience, makes every production a team experience, building community and honoring a diverse set of artistic voices.

Devising could account for this production’s lack of continuity, felt acutely during the jarring intrusion of a highly physical and stylized montage on civil war into a realistic and touching conversation between Anna and Lydia. While intriguing as a stand-alone skit, it didn’t fit in this otherwise quiet and domestic scene. Rather than heightening the tension by introducing the noise and chaos of military, politics and war, it diffused what could have been an emotional and poignant moment between two women.

At times, the facts of the playwrights’ experiences — redundant cooking lessons, too many journal entries turned to soliloquies — appear to have trumped action that could have spoken more to the heart and truth of their story. And though Anna’s faith is central to the story, her character’s default to prayer during emotional times too often stands in for resolution.

The enterprise of this production is to tell the stories of women in Guatemala. However, the playwrights crafted the script from their own experiences, so we are still quite removed from Lydia. In the end, we don’t experience her tragedy directly — the story is Anna’s and the climax is her scene. And yet Anna is also somewhat of a mystery, lacking a dramatic arc that would make her story distinct. But maybe that’s not the point of this play. It’s messy, incomplete and unresolved — but so is life for women, both privileged and impoverished. Maybe in this case, the process is worth more than the end product, and in that case, “StrangersExtranjeras” is a success.