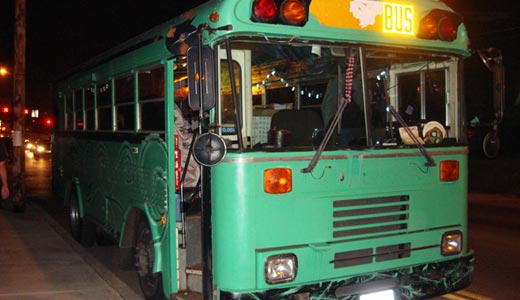 Wearing pajama pants and sandals, the two men don’t look like anarchist revolutionaries as they exit the bright green school bus that has been their home for the past few months. But in fact, the pair is on a mission to promote The Zeitgeist Movement, and on this day they are stopping in Louisville to drum up support.

A handful of potential followers and enthusiastic devotees are gathered at a coffee shop in the Highlands to learn more about the movement, which more or less advocates the complete dissolution of government, money, corporations, religion and laws.

To start, the young men show a propaganda film, “Zeitgeist: Addendum,” which consists mainly of outrageous conspiracy theories. Although some followers admit parts of the controversial film are untrue — like claiming the Sept. 11 terrorist attacks were without a doubt an inside job — they say that should not detract from its main message: That money is inherently corrupting and should be eliminated from society. Instead, supporters advocate a resource-based economy where goods are available to all people without the exchange of money or bartering. Several viewers nod in agreement as they sip $4 coffee drinks.

Other radical claims made in the film include the notion that al-Qaida does not exist, and that the modern monetary system is nothing more than a pyramid scheme. In a dramatic climax, the narrator challenges the viewer to take action, boycott every form of establishment and join the movement.

During a discussion following the film, a young man sheepishly admits he is enrolled at the University of Louisville and is considering law school. The group laughs.

Jeff Redmond is the leader of this pilgrimage, although he would not describe himself as such. Originally from Alaska, he bought the run-down school bus in Oregon and began his cross-country journey. After working at Walmart for several years, Redmond took an “early retirement,” emboldening his view of employment as “paid slavery.” The bushy-haired twentysomething with a scraggly goatee converted the bus’s diesel engine to run on vegetable oil, which he usually obtains from restaurants, although he admits that occasionally it’s necessary to obtain the oil through other means (nice euphemism).

“We are out to bring people together and urge them to meet their neighbors,” Redmond says during an interview after the gathering at Ray’s Monkey House on Bardstown Road. “Many of us are unaware of the condition that the world is in right now.”

According to The Zeitgeist Movement website and other online sources, the movement reaches far beyond the path of Redmond’s green school bus. Thousands of Zeitgeist supporters have united on social-networking sites, and nearly 20,000 people have reportedly signed a petition promoting a related, albeit loftier movement called The Venus Project (more on that later).

Casey House is several years younger and conveys a slightly less jaded demeanor than his mentor. Once a college student in California, he dropped out upon discovering The Zeitgeist Movement and hopped on the bus. He greets potential supporters as they take a seat on one of the tattered couches inside the trendy coffeehouse.

“I realized that I was not actually living, but instead just hallucinating,” House explains in his bio on the website www.zeitgeistonwheels.com, created by him and his traveling partner. “I was just lost because of what mother culture had been pounding into my head since I was a child. I had taken the money drug, which got me hooked to the college drug, which made me so dependent on both that I lost sight of who I actually was.”

Then there’s Pip, who tonight became one of two new passengers on the bus. A Louisville native, Pip (who says he no longer uses a last name) discovered The Zeitgeist Movement after a stint in the military, an institution the movement wants to dissolve. His aloof, somber demeanor starkly contrasts his brightly colored tie-dyed T-shirt.

“We believe that implementation has to be from the ground up,” Pip says after the film, referring to the movement’s goal of transforming society to live by new ideals. “It has to be completely grassroots and it should be out to inspire connection, not division. We’re not interested in driving people apart or making them into photocopied repeater drones.”

Without jobs or cash, Pip and his new cohorts say they frequently dig through Dumpsters to find food and clothing. For shelter, members either sleep on the bus or find a place to crash through the website couchsurfing.com.

Then there’s Justin Hubbard, another Louisvillian and the leader of Zeitgeist Kentucky, which meets every Sunday at the Brick House Community Center downtown. He too decides to get on the bus, which is heading to Venus, Fla., home of The Venus Project, a bizarre underground movement with lofty goals for the future. Started by 93-year-old Jacque Fresco, The Venus Project proposes overhauling society through, among other things, eliminating currency, government and corporations, while continuing to advance technology. Ideally, the end result would be a world without war, poverty or social classes, one that is brimming with advanced technology and odd, bubble-shaped architecture. The specific blueprint even includes plans for a train that would transport passengers from Louisville to Hong Kong in about two hours.

“We hope to travel to The Venus Project in order to further our understanding of the movement,” says Pip. “We’re [here] to inspire people to think and be aware, to ask questions and start their own journey.”