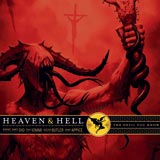 For many purists, the only true singer for Black Sabbath is reality TV star Ozzy Osbourne. Fair enough, but the first two albums recorded with wee Ronnie James Dio are pretty awesome in their own right. Because the original Sabbath lineup is technically together, Black Sabbath Mk. III has regrouped under a new sobriquet and picked up the classic metal mantle. The Devil You Know is built upon Tony Iommi’s thick-as-blood guitar riffs and Dio’s operatic vocals — in other words, all ingredients are in place. Despite its awful title, “Atom and Evil” is a solid if uninspiring opener, and the epic gothic overkill of “Follow the Tears” is exhilarating. Problem is, most of the tracks settle into patented, mid-tempo, Sabbath chug and then overstay their welcomes. The album could desperately use a few balls-out rockers a la “Neon Knights” or “The Mob Rules.” While “Double the Pain” and “Eating the Cannibals” come close, they still need a bit … more. Stately and menacing can turn into lethargic without variation. The Devil You Know is good, but not great.