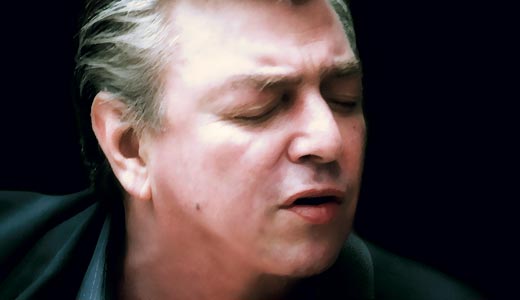 Jack Wilkins, above, and Howard Alden give Louisville a two-fer.

Howard Alden and Jack Wilkins, two of the best mainstream jazz guitarists, return to Louisville for performances at the Frankfort Avenue restaurant Varanese and for clinics and a concert at Bellarmine University.

Alden is one of the few guitarists to focus on playing a seven-string guitar, which has one extra bass string. LEO Weekly interviewed Alden from his Sacramento hotel, before his three performances at the 36th Annual Sacramento Jazz Festival, where he has played the last 15 years.

LEO: Please share some of your memories of playing here in Louisville at Bellarmine.
Howard Alden: I’ve always enjoyed it because Jeff Sherman is such a wonderful guitarist and also has created the jazz guitar workshop. He created an amazing opportunity to hang out with the likes of [Louisvillian] Jimmy Raney and Howard Roberts, Tal Farlow, Cal Collins. It’s always a relaxed and musical time, and I always look forward to coming back.

LEO: We understand that you and Jack Wilkins have been playing together recently — can you tell us about that?
HA: I’ve known about Jack even before I moved to the East Coast from California. I first heard some of his records back in the ’70s, and he just really knocked me out as one of the younger guitarists with an incredible sound and energy to his playing, carrying on the tradition but completely in his own way. He [embodies] a great combination of traditional and modern, forward-looking guitar playing. He’s just a complete musician and a complete guitarist. I’ve known him in New York since I moved there in 1982, but we never really played together much until six or seven years ago. Over the last five years, we’ve been looking for more and more opportunities to duo together. It’s always an adventure playing with him, because he is so inspiring and so responsive. He’s really just about my favorite guitarist to play with these days.

LEO: How do you choose the music you will play with Jack?
HA: We just listen to each other and play things as they occur to us. Jack has such an inquisitive mind, too, and he may have been thinking about something a couple of days ago, and he’ll bring it up, and it will take us off in a different direction. We do have a couple of Brazilian choro [pronounced SHOH-roh; not unlike New Orleans jazz] pieces, which Jack has been working on. Jack will just get on a kick, sometimes, and say, “Let’s play some Harry Warren songs, or some George Gershwin,” and we’ll just go with it.

LEO: Considering that you will be playing two nights in a restaurant and one night at a college concert hall, does the venue or ambience affect what or how you will play?
HA: It really doesn’t, and it really shouldn’t. We try to play as intensely and clearly in a small, informal venue, where not every ear is tuned into us, just as much as on a concert stage where everybody is listening to every golden note. Ideally, you should treat each one the same and be just as relaxed — people tend to tense up on concert stages more, but I try to avoid that.

LEO: Tell us about your approach to teaching guitar.
HA: Howard Roberts was one of my guitar teachers. He was a great teacher because he had the ability to really focus on what a student needed at the time and what he was interested in learning. He had the ability to articulate things and take away the mystery, and that’s what I strive to do.