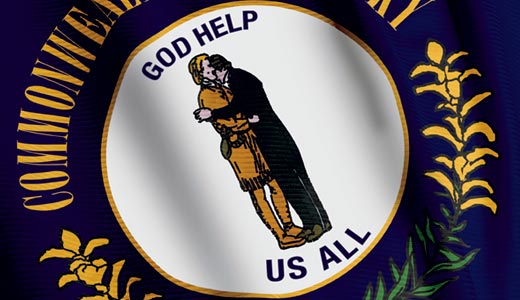 As part of an extra-special addition to the General Assembly, Gov. Steve Beshear is expected to announce a state motto more in tune with the commonwealth’s increasingly dismal financial, social and moral outlooks.

“I’ve always told the people of this great state the truth, no matter the cost or how ugly that truth might be,” Beshear said in his latest webcast. “And I’m here today to tell you that we’re all doomed.”

Citing, among other things, a nearly $1 billion statewide budgetary shortfall and the discovery of a demonic portal to hell in the bowels of Squire Boone Caverns, the governor has unveiled a new slogan and accompanying flag, “to better reflect the utter sense of doom that now binds us all like rats on a sinking ship,” he said.

Before a cavalcade of camera-wielding press, aides unveiled the new flag, which depicts the familiar frontiersman and ducktail-statesman embracing one another for a good cry; the motto surrounding them: God Help Us All.

“Steve was toying with a few other ideas,” said Lt. Gov. Daniel Mongiardo. “‘Kentucky Is For Losers,’ ‘Only Doomed Assholes Live in Kentucky,’ that sort of thing. But none of them really conveyed the Biblical sense of ennui and gloom, I think, better than the one he ultimately chose.”

When pressed for comment, Senate President David Williams said, “I’ve been saying this for years and nobody ever listened to me. I hate all of you more than ever.”