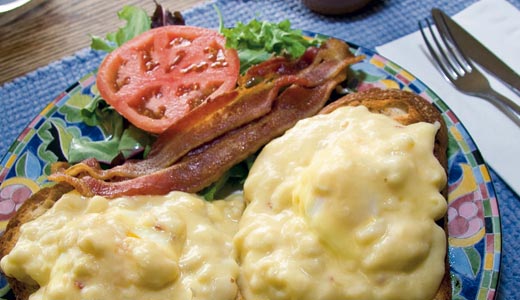 Photo by Ron Jasin
(Featuring Paige Moore-Heavin)
You can, and probably do, call it a Danish pastry, but its roots lie in Vienna. Nevertheless, the Danes have made this rich and delicious pastry their own, and you’d be hard-pressed to find a better one in the Old Country than you can enjoy right here in Louisville at Danish Express.

This quaint St. Matthews storefront occupies a cozy space with big plate-glass windows that make up the entire front wall, facing east to bring in bright sunlight in the morning.

It’s open from 8 a.m. until 2 p.m. daily (except Sunday), offering breakfast throughout and lunch at midday. The breakfast menu — including but not limited to the rich, oversize Danish — makes it one of the city’s top spots to break a fast. At lunchtime, it’s still a decent place for a quick meal, but facing much sterner competition, it’s not quite as close to the front of the pack.

A dozen well-worn but sturdy round oak-top tables decorated with baskets of silk flowers fill a room with walls the color of cream of asparagus soup, with a section of bright cream of tomato beneath a chair rail along one wall. There’s an odd blend of paintings of racehorses and food; one appetizing work features a cup of coffee and a doughnut. At the back of the room, a glass case houses the day’s selection of Danish (get there early or your favorites may run out), along with an intriguing collection of cookies and bars.

The breakfast menu features Danish, of course, $2.50 each for your choice of cinnamon, cream cheese, apple, apricot, cherry, strawberry or blueberry. There’s a selection of egg dishes and omelets, mostly in the range of $4.50 to $7.

We arrived at 9 a.m. and found our favorite cream-cheese Danish already 86’d, so we went with a cinnamon model and a table knife to split it. Half of one of these hulking pastries is plenty, anyway — you’ve got to know when to say when. Rich and tender, these babies must be an inch thick, loaded with cinnamon and sugar and finely chopped nuts.

Tomato juice ($1) is served in a pop-top can, but it’s pretty good, with a frozen glass so it goes down cold.

A cheese omelet with bacon ($6) resembled fluffy scrambled eggs more than a traditional French omelet, but it was delicious, with mild American cheese, crisp bacon and plastic tubs of jelly and real butter to go with tangy-sour, seeded Swedish rye toast.

The Brown Derby with one egg and bacon ($5.50) featured a well-poached egg, hot but not hard at the center, atop a thick slice of good homemade white bread, covered with a light cheese sauce. Two pieces of crisp bacon, iceberg lettuce and a thick slice of tomato sat on the side.

A hearty breakfast for two was $18.55, plus a $4 tip for surprisingly attentive service from what appeared to be a single server handling the entire busy room.

I always think of this place for breakfast — the name “Danish” pretty much ensures that. But they offer lunch, too, and our breakfast was so good, we had to come back. The lunch menu features soups, salads and a selection of sandwiches in the $6 to $7 neighborhood.

Soup of the day, vegetable beef ($2.50/cup), was fine. Long-simmered chunks of potato joined chopped celery, onions, green peppers and corn niblets with a few cabbage leaves and tiny bits of beef in a homey mix that reminded me of my grandmother’s version.

The pimento cheese sandwich ($5.95) was just OK. The good white toast was thick-sliced and substantial, but the cook must have suffered from astigmatism: It was unevenly sliced at steep angles, thin on one end and thick on the other, making an odd wedge of a sandwich too thick to bite at the wide end. The pimento cheese was just so-so: Grated mild yellow cheese was incompletely blended with mayo, with only a small ration of diced pimento and no apparent spice.

From the dessert case, a walnut delight cookie and a seductive coconut-chocolate-walnut bar made a fine finish to a filling lunch. The tab was $23.11, plus a $4.89 tip.

Danish Express accepts no credit cards. It’s cash or check only. My advice: Hit a nearby ATM on your way in. —Robin Garr

When my friend Lynn suggested Captain Pepper Jack’s Aero Bistro for girls’ night out, I was a little confused. This place, which opened near Bowman Field in May, was new to me. “It’s part Southern American and part Mediterranean,” she said. Well, that’s an odd combination. But, ever the foodie, I was willing to give this culinary mash-up a try.

I arrived at 6:15 p.m., and a friendly waitress/hostess offered my pick of tables. The restaurant is a big, open room painted in dark colors, with a small tiki-style bar in the back and vintage travel posters lining the walls.

Within a few minutes, the waitress returned to ask for my drink order. Because beverages aren’t listed on the temporary, photocopied menu, she brought a price list from the bar. Drink prices are affordable: $2.75 for bottled domestic beer, $3.50 for a glass of house wine to $4.50 for top-shelf liquor.

I ordered a bottle of import beer ($3.50), browsed the menu and waited for my friends. As the dining room filled, the speed and quality of service declined noticeably. Drink orders were slow to arrive. Water came by request only. By the time we were ready to order appetizers, we had to wave our arms for attention.

Our first appetizer, artichoke pub nuggets ($6.99), consisted of perfectly batter-fried artichoke wedges with a tangy horseradish cream sauce. They were so good that we ordered a second helping. Our second appetizer, coconut prawns ($7.99), arrived with a side of mango marmalade — but without the side of plantains described on the menu. We told the waitress, who hustled back to the kitchen. Within a few minutes, the chef arrived with piping hot wedges of plantain, which we used to sop up the rest of the mango sauce.

Later, our waitress nowhere to be found, the chef returned to take our entrée orders. All hit a high note, but we waited way too long for them — perhaps because Lynn’s fried chicken ($11.99) was cooked to order. But after the first bite of that chicken, we realized the wait was worth it. It was crispy and golden brown outside, flavorful and juicy inside, without a speck of extra grease. That chicken is doing someone’s grandma proud.

Aside from the fried chicken, we ordered from the western hemisphere (chicken and dumplings), the eastern hemisphere (a gyros) and somewhere in between (the kibby burger — a hybrid of burger and bulghur). I got the hot twist ($11.99), a chicken kabob seasoned with a sweet-spicy kick of Pakistani and Indian spices. The chicken was tender and juicy, served with a side of nutty, subtly spiced rice and a perfectly cooked medley of zucchini, squash and peppers.

Everyone at the table raved about their food — especially the artichoke appetizer and fried chicken. If management can kick up the slow, disjointed service, Louisville’s newest culinary mishmash will really shine. —Paige Moore-Heavin