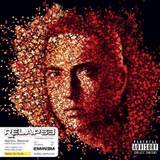 When you’ve spent the better part of a decade pushing the envelope, once it’s fallen off the table, is anything shocking? Eminem is back, and he’s still bashing his mom, ex-wife and C-list celebrities with the same punch and bravado as before, even if it no longer holds the sting as before. I wish I could say that his nearly five years off has brought a new level of maturity, new topics and new weight to his lyrics. Alas, no. We know he is fully capable, as the songs on his “8 Mile” soundtrack proved, but no, the stagnancy of modern pop is in full effect. Music listeners stay 14 years old, donchaknow, and artists are not allowed to ever grow up.

This is not to say Relapse is bad. Several songs are very enjoyable, and Dr. Dre’s production is always a welcome thing. Eminem is an agile and nimble lyricist and rapper; he bounces over Dre’s beats like Tigger through 100 Acre Wood. Only “Beautiful” opens the window into Marshall Mathers 2009, not the Eminem character, the comedian. “Unfortunately I am,” he says. “I just hide behind the tears of a clown.”