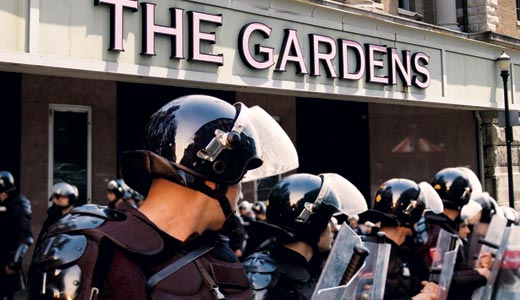 This is no mean feat. How could anyone have foreseen that a lowly hippeastrum would not only sprout but thrive in the dark former armory.

“Damn stonemasons — I knew there was a crack in the bedrock somewhere,” Brinton Beaurigard Davis, the armory’s chief architect, howled from beyond the grave.

A genus of the Amaryllidaceae, hippeastrum — not to be confused with a patchouli-drenched busker — is found only in South America, and requires as little intervention as possible. Wiche described it as a freak of nature. “And a beautiful one at that,” she said, at which point the hippeastrum sharpened a leaf and sliced open Wiche’s curious index finger.

Adjectives failed to materialize for Wiche’s “Homegrown” co-host, Bob Hill, whose utterances consisted of “Gosh!” “Golly,” “I didn’t know that,” and other awshucksisms.

The sighting forced a switch in Gardens event programming: Next week’s wrestling match between Laila Ali and Jerry Abramson will go off an hour later than expected, but the Shriners’ annual “Fez Fetish” party on July 4 weekend will proceed without calamity.