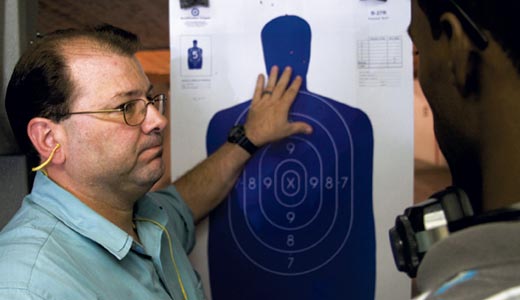 After a light squeeze of the cast polymer grip-frame, the Walther P22 semi-automatic pistol pops. The chamber ejects a fiery spark and the first shell casing flicks up against my protective eye goggles. The weapon kicks back, quickly unloading a rapid 10-round cartridge that dots the featureless silhouette’s upper body. A firm tap on my left shoulder from the Rev. Ken Pagano of New Bethel Church indicates the first round is complete.

The pastor retrieves the results that show six bullet holes in the paper silhouette’s thoracic cavity, a triangular area he describes as being “from nose to tits.” That’s good, according to Pagano, because protective body armor would not cover that area. The south Louisville pastor then demonstrates the power of a deadlier handgun, the Sig Sauer 225, a semi-automatic weapon that is a favorite among law enforcement agencies around the world.

On this recent weekday morning, Pagano has agreed to meet me for a few rounds of target practice and to explain his love of God and, well, guns.

Inside the Bluegrass Indoor Range where he teaches a concealed weapons course (that is, when he’s not preaching the word of the Lord), Pagano greets gun owners in the lobby, casually talking about firearms, gun laws and the best types of ammo.

We stroll back into the target practice area, where shooters aim and fire at paper targets, some of which feature men in ski masks, armed with knives, and others of men in turbans, carrying bazookas.

“Firearms, it’s a sport, man. It’s fun,” Pagano explains. “It’s the most fun you can have legally with your pants on outdoors.”

Believing God and guns are fundamental parts of America’s heritage, the local evangelical minister — a former Marine who goes by the alias cowboy name Jake Starr in a local shooting league — has stirred a local and national storm of criticism by encouraging members of his Assemblies of God congregation to bring their unloaded firearms to a rally at his Valley Station Road church on Saturday, June 27.

But Pagano doesn’t understand what all the fuss is about, saying the event is intended to advocate responsible and safe gun ownership, something the good book itself advocates — sort of.

Scheduled to coincide with July 4 festivities, the Second Amendment celebration will feature a handgun raffle, gun safety instructions, patriotic music performances and presentations from local gun store owners inside the church. It has sparked the typical gun control debate and prompted critics to decry the mixing of faith and firearms.

“I want people to know there are logical, rational, community-minded people, who are educated and hard working who believe in the Second Amendment,” Pagano says, adding that he associates firearms with freedom, not violence. Although he is a strong believer in the constitutional right to bear arms, he also believes the Bible condones the use of firearms for self defense, which should be the last option and only used when a life is threatened.

According to Pagano, the media coverage — including stories by the Associated Press and USA Today — and subsequent backlash reveals the misguided belief that Christianity is rooted solely in Jesus’s benevolence. But Pagano rejects the idea that faith is all about pacifism, believing Scripture — particularly the Old Testament — clearly instructs believers to protect themselves with arms.

Some critics, however, say the gun-toting reverend is mixing up his messages.

“The right to bear arms is a political freedom we have in the United States. He’s taking that political freedom that we have here and using Christianity to celebrate it, but I don’t see a biblical text that supports celebrating arms,” says University of Louisville professor Mary Ann Stenger, who teaches religious studies. “[The Old Testament] does reflect the history that included wars, which is true. But I’m not sure you could look at any part of the text as a celebration of weaponry.”

It was only after the Roman Empire established Christianity as its official religion that the issue of arms emerged, causing military leaders to search for “just war” verses, the professor explains.

“Pastor Pagano needs to spend an evening with me in the emergency room, because a victim of gun violence has nothing to do with freedom,” says Dr. Bill Smock, an emergency room doctor at University Hospital. “Clearly there are too many guns on the street. If we’re seeing more than one gunshot victim a day here at University, we have to look at why people are being shot.”

But Pagano insists his rally is about celebrating guns as a means of defense, something even Jesus endorsed. To explain further, he points to the Book of Revelation, the Bible’s grand apocalyptic finale in which Jesus returns with a vengeance and dispatches holy firepower to eliminate sinners.

“If a person as a Christian chooses to be a pacifist, I say this: Pacifism for Christianity is optional, it’s not a requirement,” he says. “There is no doubt in my mind that without a deep-seated belief in God and firearms, this country would not exist as it does here today. You can’t remove the two. That’s our history and our heritage. I’m proud of it.”