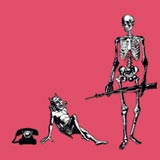 Oohs and Aahs sounds lavish considering its humble genesis in the bedroom of Say Hi’s lone band member, Eric Elbogen. After relocating from Brooklyn to Seattle, it’s obvious that Elbogen was simply eager to piggy-back on Seattle’s recent resurgence as an indie-rock Mecca. Just like the influx of bands to the area in the early ’90s, Say Hi is shamelessly leaching on a sound that has been well-defined by local acts like Death Cab for Cutie and Throw Me the Statue. At no point on Oohs and Aahs does Say Hi strike a resonant chord with uninspired song titles like “November was White, December was Grey,” “Sallie’s Heart is Stone” and “Dramatic Irony.” The album’s lyrics are melodramatic, while the music is simply unremarkable at its best and like fingers on a chalkboard at its worst.