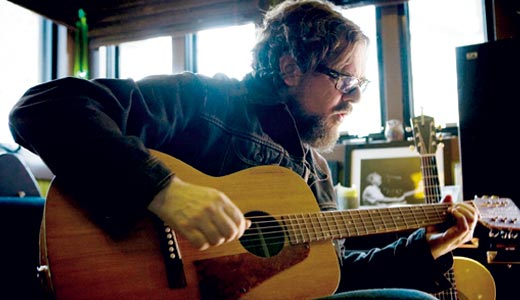 Patterson Hood doesn’t come off like the underappreciated pseudo-rock-star that’s been kicking around the scene for more than 10 years. He looks more like a middle-aged gas station attendant who sings of blue-collar plight on nights and weekends, the kind of Southern character who only exists in Tennessee Williams plays and John Prine songs.

Hood has co-fronted alt-country outfit Drive-by Truckers, alongside guitarist/singer/songwriter Mike Cooley, for 13 of the duo’s 25 years of collaboration (beginning with the group Adam’s House Cat in the late ’80s). Through his Alabama drawl, Hood describes their working relationship with a chuckle.

“Some days we’re Archie and Edith, some days it’s Sanford and Grady, and some days, maybe, we’re The Honeymooners, just Fred and Alice hanging out,” he says.

What makes the chemistry work is insignificant to the fact that, somehow, it just kinda does. “That we’re finishing up our 10th album, and I think it’ll easily be as good or better than anything we’ve ever done, is amazing, because not many bands are still interesting on their 10th record,” he says.

Hood’s second solo album, Murdering Oscar, has been a long time in the making. Parts of it even pre-date the Truckers. “Some songs go back 15 years, when I first moved to Athens, Ga. I didn’t have a band then, and I didn’t have money for studio time, so I made a cassette tape in my house of this group of songs I wrote, and called it Murdering Oscar (And Other Love Songs),” he says.

Of the album’s modern incarnation: “About half the songs come from that original tape, but I couldn’t see doing the whole album, because I had changed a lot in the intervening 10 years,” he says. “So I wrote some new songs that were kind of answers to the old ones.”

Hood stops at Headliners Friday with The Screwtopians, an all-star band that he assembled to record the album. “This is the first time David Barbe has toured since Sugar broke up in ’95,” he says. “He’s been producing Truckers records for almost a decade now, but I’d never really gotten to play with him as a musician before.”

There’s another first-time collaboration on Murdering Oscar: Hood worked on three songs with his father, David Hood, bassist for the legendary Muscle Shoals Rhythm Section. “Dad’s a great player, and I had wanted to do something like that for a long time. It was pretty collaborative when he came in; I certainly didn’t tell him what to play.”

The elder Hood has appeared on songs by The Rolling Stones, Aretha Franklin and Levon Helm. “On ‘I Understand Now,’ I was kind of expecting a little more of a Muscle Shoals-sounding bass part, but what he actually played sounded more like a Motown part. It definitely changed the feel of the song quite dramatically from what I had anticipated.”

And what about the paradoxical name of the album?
“It just kind of struck me as funny … It’s a true statement. ’Cause I think you can make an argument for each one of those songs, in one way or another, being somewhat of a love song. I’m not necessarily known for writing love songs, and my take on the love song probably isn’t going to put Lionel Richie out of business … let’s just put it that way.”