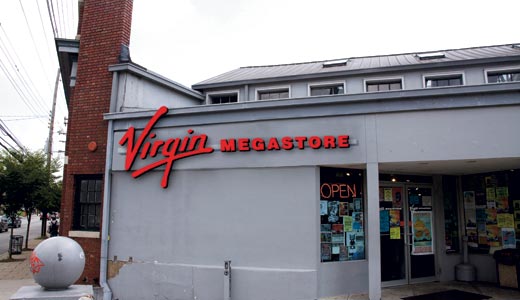 Who knew jam-master Jim James was a cardigan fanatic?

Seen prowling the streets of Germantown, and his newest home in the grand ol’ NYC, James, frontman for Louisville heroes My Morning Jacket, was spotted again here last weekend fastidiously buttoning himself up for a night of debauchery and dereliction at Angels Rock Bar. News of the “wardrobe malfunction” quickly found its way onto blogs worldwide, and responses from fans flooded in.

“It’s the middle of fucking summer!” wrote one Louisvillian.
“Which thrift store?” wrote another.
“Can I find it on eBay?” said a third.
“I saw him shake some dude’s hand on Conan after he took a piss,” said another.

At press time, musicians who have followed in the footsteps of falsetto, like Band of Horses and Fleet Foxes, were talking to their respective managers about a makeover. Both bands had no comment at this time.

“It’s really a shame,” said one Heine Brothers employee. “Here I thought morning was his prime time. Breakfast and coffee being the most important meals of his day. Now this!”

A benefit concert is scheduled for August.

“These are tough times for the indies,” said John Timmons, who started ear X-tacy more than 20 years ago. He grew his business organically, bouncing from modest hamlet to modest hamlet until he took over Pier 1’s spacious locale at Bardstown Road and Sherwood Avenue in 1995.

Since then, the site has hosted mammoth in-store appearances by Queens of the Stone Age, Indigo Girls and My Morning Jacket, while kids spend their parents’ money. “Look at it this way, how could I possibly compete with Virgin’s iconic signage?” Timmons said.

The move is a relative coup for Virgin, which was part of an empire financed by uberbillionaire Richard Branson before it was eventually sold to an outside firm a few years ago. Branson, a consummate thrill-seeker, apparently sealed the deal with the ear when Timmons refused to skydive from a hot-air balloon during the Great Balloon Race at Bowman Field.

Band leaks album; band outraged
Members of alt-country trio Gravyboat threw up their hands last week after learning their new album, The Newest of The New, leaked on thepiratebay.com.

Singer Chesty LaRue came within an inch of pulling a Lars Ulrich, blasting downloaders for stealing money from the band’s pockets.

“Sure, we lost money on our three-date tour of southern Kentucky last year, but that’s not the point!” LaRue said. “I don’t know what’s going on over there in Indonesia, but just because you have broadband but no girlfriend doesn’t mean you can ruin my dreams.”

Bassist Emilio “Rasputin” Rasputina, 32, was abject but strangely philosophical. “Karma’s a bitch,” he said, stroking his goatee. “But at least I can hear my bass in the mix on those tracks.”