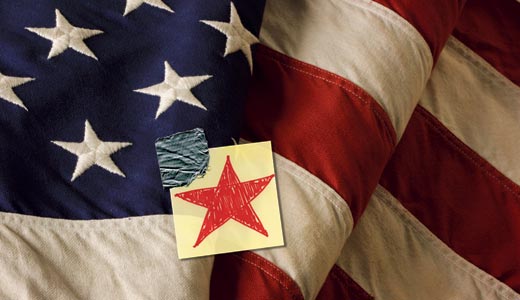 Rays of sunlight bounced off the Ohio River on an unseasonably mild summer afternoon as Mayor Jerry Abramson and assembled city leaders stood on the deck of the Belle of Louisville, waiting for the last of the local and national press to gather.

“I’m amazed we’ve finally arrived,” Abramson told a reporter, flashing a toothy grin in a rare moment of candor. “I guess you could really say now that anything is possible.”

In a move unprecedented since the Civil War in America, Louisville Metro has achieved secession from the state of Kentucky. The city, with a population of just over 700,000, will now petition the federal government to become the country’s 51st state.

“It’s a bright day for the city of Louisville, as you can see all around me,” Abramson told reporters as he pointed toward the sun. “For so many years we have struggled in a state that gave us so little. And now, for better or, well, best, we’re on our own.”

The secession caps a years-long political battle for autonomy between city and state lawmakers, with the latter ultimately conceding that the city — which provides more than half of the state’s tax-based revenue — would be better off solo. In a voice vote that proved to the be final act of this summer’s special legislative session of the General Assembly, the Republican-controlled Senate passed a measure dissolving Louisville’s designation as a city. The House, where Democrats control the majority, passed the bill last week. Gov. Steve Beshear is expected to sign it into law as early as this week.

The Kentucky Constitution allows for the legislature to create and dissolve cities in the commonwealth.

“We will regret the loss of revenue, obviously,” Senate President David Williams, R-Burkesville, said. “But this has been a long time coming. The state will no longer be forced to capitulate to major projects and their affiliated tax increases on the people out in the state. In that sense, Louisville has hurt Kentucky since before Harvey Sloane’s first term.

“In other words, we’re getting less money, but we’re also spending a lot less on mostly extraneous stuff.”

Metro Council President David Tandy, who high-fived Abramson as the mayor left the podium, praised the legislature for acting decisively on legislation affecting Louisville, a rarity in the last several years.

“Sen. Williams, Speaker [Greg] Stumbo and other leaders have finally stepped up for Louisville,” Tandy said. “And truthfully, I couldn’t be happier.”

“Look, we still have a lot of work to do,” Clark said. “It’s an exciting time, but it’s also a time to keep our eye on the ball. We’re not even sure what kind of constitutional crisis this might bring up at the federal level.”

While the U.S. Constitution is not explicit when it comes to secession, most legal experts have agreed since the Civil War — when 11 Southern states declared their independence from the Union and created the Confederate States of America — that such a right is not implied.

“This is something the entire legal community will be following with abandon,” Jacob Gross, a constitutional law professor at Georgetown University, said. “It could set up a constitutional crisis; it could spark a national movement; or it could fall flat and leave Louisville begging for its place back.”

Abramson and U.S. Rep. John Yarmuth, D-Ky., both of whom have appeared at campaign events alongside President Obama, said negotiations with the White House have been positive and productive.

“Without giving away too much, I can say they’re mostly interested in making sure we won’t start out with a mutiny on our hands,” Yarmuth said.

Parallel to the economic argument for secession — city leaders say they won’t lament the annual parade of ignominy that is a General Assembly session — is a moral one: The city’s liberal politics, such as passing a so-called “fairness ordinance” that grants gays and lesbians equal workplace rights, have offended tightly wound rural Kentuckians. Some argue that has hindered progress in the city, putting a kind of philosophical pressure on lawmakers who might otherwise support what was the state’s largest, most recognized city — were it not for the fact that they had to face re-election in conservative areas.

“You’ll never get anybody to tell you what it’s really about, but it’s that,” said a state representative from Lexington, now the state’s largest city, who requested anonymity. “Here you have a city trying to make its own way, to be on the vanguard of some things, and a few rednecks come on in and are ruining the party. I say good luck to Louisville. You’re probably gonna need it.”