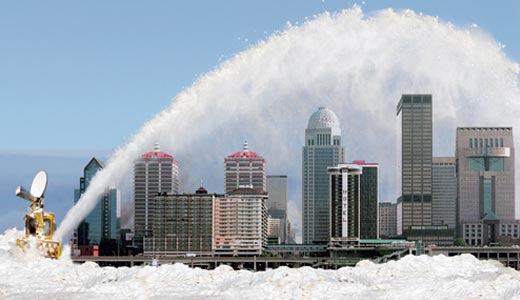 First a windstorm ravaged Louisville, and then a sheet of ice blanketed the city, events that proved to be ratings gold for local news channels.

“We know our viewers love to get all worked up about a little snow. They love to make that mad dash to Kroger for bread and milk and toilet paper and condoms,” says WLKY station manager Glenn Haygood. “This really is a win-win for everybody … Kroger included.”

Although the stations considered buying a few gently used snow makers from Paoli Peaks, TV execs ultimately decided to plunk down the extra cash for a brand new machine that is capable of generating enough snow and sleet to cover the ground from Okolona to St. Matthews.

“This is a historic day for Louisville meteorologists,” says WAVE-3 weatherman John Belski, before going on to reminisce about “Winter Storm ’94,” a time he describes as “the best days of my life.”

WLKY chief meteorologist Jay Cardosi was on the verge of relocating to CBS sister station KDLH in Duluth, Minn., simply so he could “do some real meteorological work for a change.” But now Cardosi says he plans to remain in Louisville for many long, cold, snowy winters … and maybe even a few snowy summers.