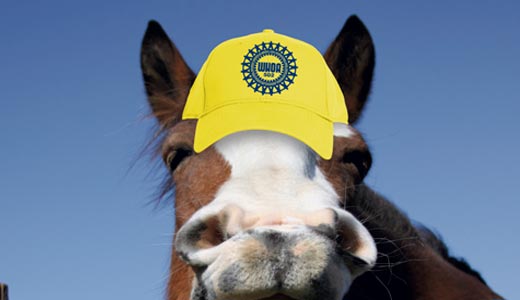 Claiming they are frustrated with their “small, flamboyant oppressors,” local horses announced the formation of a labor union during a stirring rally in the paddock area at Churchill Downs on Sunday.

Invoking the passionate labor demonstrations of the early 20th century, the union’s organizers announced the creation of Working Horses of America (WHOA). Through collective bargaining, WHOA aims to “Bring Stability to the Stables” and “Stirrup the System,” as protestors’ signs proclaimed. The horses’ initial demands call for universal healthcare, 401(k) retirement accounts and the contractual rights to “buck and stomp the next little shit who pulls out a whip.”

The demands come amid a turbulent economic environment for the horse industry in Kentucky. Racetracks are reducing meets and offering gimmicks like night racing in order to stay afloat.

Meanwhile, in Frankfort, legislators are wrestling with a bill to allow slot machines at racetracks to help the struggling industry. Slot machines are highly controversial in Kentucky, where many people staunchly oppose gambling on Christian moral grounds, unless it’s pari-mutuel wagering, scratch-off lottery, bingo, Powerball, Internet gaming, charity poker, investing in a retirement account, having unprotected sex, driving on the Watterson Expressway, or eating at the seafood ’n salad bar at Golden Corral.

When asked if it was risky to demand more from owners during a time of economic upheaval, Kentucky Derby winner Mine That Bird shook his head and muttered a disgusted “Neigh.”