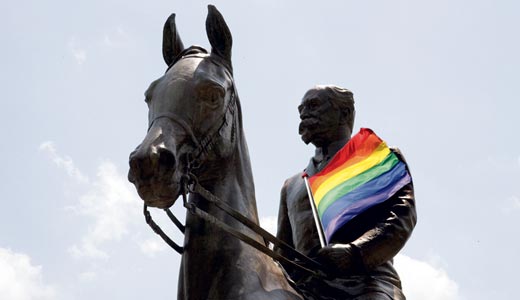 On a hot, muggy day, Michael Heitz stands atop a hill in the lush, undulating landscape of Iroquois Park and points to something off in the distance, near a clearing of trees.

As director of Metro Parks, Heitz has every reason to be proud that patrons are taking full advantage of Iroquois Park’s newest attraction. After receiving a generous grant from the Fairness Alliance and an undisclosed pool of wealthy donors, Louisville’s most centrally located Olmsted Park is revamping its tallest point in an effort to stem the tide of South End homosexuals flooding into the Highlands.

“We looked at a lot of different designs,” Heitz says. “But the ones that intrigued us most were the most practical.”

He cites the addition of 37 bathrooms with extra stall space, the creation of the city’s only gay dog park and the sculpting of the hill’s apex into the shape of a phallus as wonderful perks of the new design.

Yet many local residents are split over the new name.

“I think it’s great,” says Glen Tennis, a transplant from San Francisco. “Before [Fag Hill] came, I was looking at a nice place over on Bonnycastle. Now I can walk my butch Pomeranian and meet like-minded homosexuals in a convenient, bucolic and gay-friendly environment.”

Okolona firefighter Reginald Deeds, who is not gay but stresses that there’s nothing wrong with it, thinks that as soon as gays get their own park, “Next thing you know they’ll be wanting their own businesses and homes and equal rights as citizens … Where does it stop with these people?”