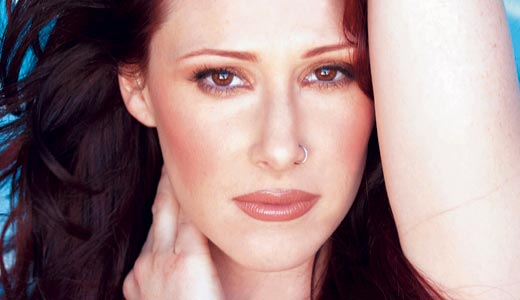 Tiffany, above, in her hey day battled with Deborah Gibson for this writer's attention. She appears at this year's Kentuckiana Pride Fest.

I hated her. She who dared compete with my little Debbie Gibson for chart position. She who toured the malls and made hits out of cover songs. Debbie wrote her own songs. Tiffany sailed through. Or at least that’s what I believed as a headstrong, awkward 12-year-old campaigning for the sweet, wholesome girl-next-door over the red-haired vixen from California.

I have since expanded my musical horizons and realized there is enough room for both on my iPod. Nostalgia has no limits. All is forgiven as we look into the rearview mirror. The late ’80s were about fun, innocence and junior high dances. Hearing the first few notes of Tiffany’s “Coulda Been” takes me right back to that first dance — me plastered against the gym wall like the Velcro on my Adidas, waiting, hoping, dreaming to be asked …

LEO: Tell me what brings you to our Pride Fest.
Tiffany: The audience is always a good time. You get there and everybody wants to have fun, wants to dance. It’s super high-energy. I do a little old school — “I Saw Him Standing There” — and then a lot of my new dance stuff. It’s a fun show.

LEO: You now reside in Nashville. What brought you there and what are you working on now?
T: I’m moving in a more country direction. All my albums have been singer-songwriter stuff, so this is a natural progression for me. Nashville is the best place to be. It’s a new journey for my life, working with great songwriters. I’m really lucky that my fans allow me to do different projects. They get it. I do best with a live mic, and you know, let me sing you a song.

LEO: What’s your take on the decline of the shopping mall?
T: First of all, the shopping mall did me no favors because I was a mean shopaholic. I can work a mall in a heartbeat. But I think it’s really sad to see malls go, because it really was a safe place at the time. It’s another temperature-taker on where we’re at. I’m the mom of a 16-year-old, and I kinda see that there are so many great things in his future that I didn’t have, but there are so many wonderful, more simple things we had growing up that I see going away, and it’s very sad.

LEO: What do you make of the recent nostalgic resurgence — like the New Kids, etc.?
T: The music was fun, you know? You didn’t have to have a sexy outfit. It was sexy but wasn’t sex. We really bridged the gap with being a little mysterious, a little mild, a little crazy, but not cursing every five minutes or showing some skin. I think a lot of people in our generation — we want to reminisce about having fun. We wouldn’t change our lives, but we can go out to one of these shows and blow off some steam, have a laugh over which New Kid was your favorite.

LEO: Do you keep in touch with Debbie [Deborah] Gibson?
T: We’re actually friends, and we’ve been doing some shows together. I think the fans like that. Everyone always thought we were rivals, and it was nothing like that. We have mutual friends, mutual experiences. We have that bond of growing up a pop star — we both went through it, we were both a part of the music industry at a very young age. Our days were probably very parallel. Nobody probably gets it as much as her.

LEO: What Debbie song do you wish you would have sung?
T: I’m a big fan of “Lost in Your Eyes.”

LEO: Will you forgive me for being more of a Debbie fan when I was 12?
T: That’s OK, my sister was a big Deborah Gibson fan. You walked in her room and there was nothing but Deborah Gibson posters. She was not sorry at all. I would joke with her and say, “I guess you’re not going to the Lakers game with me, then.”