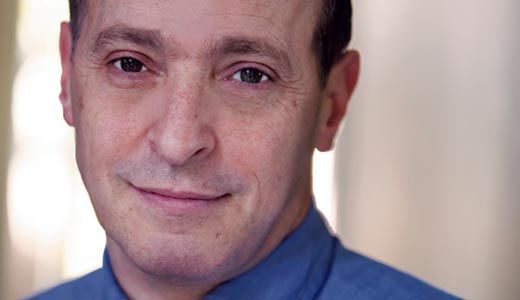 Instead, he opted for a more unconventional method — a three-month hiatus in Tokyo.

“And it worked,” Sedaris, 52, says in a nasally voice that alternates between flashes of boyish excitement and deadpan observation.

From a hotel room in Fargo, N.D., the American-born humorist talks with LEO Weekly about a truly random array of topics, including his latest book tour, a love of grocery shopping, Miley Cyrus and, of course, giving up cigarettes.

“In Tokyo, so many people were getting burned by lit cigarettes that they passed a law saying you couldn’t smoke on the street,” he explains matter-of-factly, as though his globetrotting expedition to kick nicotine was completely reasonable. “Plus, I had gone to Tokyo once before and I loved it. I thought this would be my reward for not smoking.”

Perhaps even more unorthodox than his tailor-made smoking-cessation program, however, is why he quit: “All the decent hotels went non-smoking in the United States,” says Sedaris, recalling the many times he ended up in seedy hotels near the airport. “If someone else is paying the bill and you’re staying at the AmeriSuites instead of the Ritz-Carlton, that’s just heartbreaking … But I see no reason for anyone else to quit. I mean, I did it myself so I could stay in nice hotels.”

And the man is quite concerned with hotels, an understandable preoccupation given he spends between two and four months a year traveling. Earlier this month, Sedaris embarked on a tour promoting the paperback version of his latest collection of essays, “When You Are Engulfed in Flames.”

One of his first stops was Evansville, Ind.

“I was at this Fairfield Inn, which is fine if you want to make your own waffles and keep a really close eye on your car, but it is not the style to which I am accustomed. God that place was depressing. That’s what happens when you go to Evansville, and I wanted to go to Evansville.”

On this tour, Sedaris — a North Carolina native-turned-expatriate — wanted to visit small cities that authors often skip. “I think I signed books for eight hours in Evansville,” he says. “But what I want to do is bring the Four Seasons with me to places like Evansville.”

From here, the conversation bounces from one bizarre topic to another, seamlessly woven together in true Sedaris fashion:

LEO: Since moving abroad, have you tried to keep up with American pop culture?

DS: You try to, but it moves so quickly. You don’t want to come back to the United States and not know who Miley Ray Cyrus is because people just treat you like a foreigner … A couple years ago they showed an episode of “Hannah Montana” on the plane, and I was so glad that I watched it just because I would have been so left out …

For a while I had a subscription to that In Touch magazine. The celebrities there are kind of young for me, but you have to know who they are. Now it’s one of those magazines I don’t allow myself to buy, I just have to find it.

LEO: It’s also good reading while in line at the grocery.

DS: I actually go to the grocery every day of my life, even if I’m just going to buy a battery or something. I like being out in the world and I like buying stuff and it doesn’t even really matter what that stuff is. Sometimes I just like going to the grocery store so I can be crabby about how long the lines are.

LEO: Is this something you do even when you’re on tour?

DS: Oh yes, when I come to America I’m just delighted by the cashiers at grocery stores. In France, they don’t put things in bags for you. The cashiers sit and they scan your items and then they ask you for exact change.

LEO: So you split your time living in France and England with [longtime boyfriend] Hugh. Which country feels more like home?

DS: These days probably London because I have the right to work there. I just got my green card and had to take a life-in-the-UK test and learn the difference between the House of Lords and the House of Commons. All that stuff most people don’t understand when they hear the news I understand now. I studied really hard.

LEO: Given you spend so much time traveling, I would imagine you meet a lot of people who provide good fodder for stories.

DS: I met a guy on a plane last month, and he told me that one of his daughters eats road kill. To me that was really shocking, but he was trying to put a bright face on it, you know, saying she’s a free spirit. But you sensed something a lot darker was at play … There was just something poignant in the story, along with his friendliness and his vulnerability. I felt really privileged …

Sometimes you get good stories when you just ask one question … The woman I did an interview with last night, she had a tattoo on her arm and I asked, “What does your mom think?” She said, “My mom is completely sleeved and she has big grommets in her ears.” So I said, “What does your grandmother think?” It turns out her grandmother has a tail tattooed at the top of her legs coming from her pubic hair. Her thing is to undress and tell people, “I have a tattoo of a mouse. Oh my pussy ate it!”

Can you believe it? Can you imagine your grandmother talking like that? That kept me up last night.

Reading and book-signing to promote the paperback version of his latest, “When You Are Engulfed in Flames”

Free — Limited seating is available inside the store, although audio and video will be made available outside