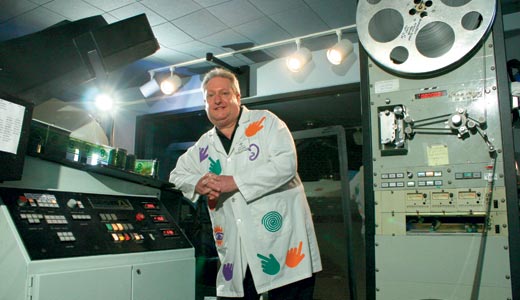 Rick O’Neil is the chief projectionist at the Louisville Science Center’s IMAX theatre.Photo by Frankie Steele

Rick O’Neil and Erin Day need to get out more. Two of a handful of projectionists in charge of operating the IMAX projector at the Louisville Science Center, they keep their eyes fixated on a platter of spinning blackness inside a dimly lit booth.

“We’re the most well-read people,” jokes Day, who has worked at the Science Center since she was a volunteer.

As heavy and bulky as these reels can be, there’s no comparison, Day says. “Digital just doesn’t do the format justice.”

Projection technology, however, is moving toward digital as studios crack down on piracy and seek to save money, says Stuart Neff, a staff adviser at U of L. A fan of classics like “Maltese Falcon” and “Citizen Kane,” he showed films at the Red Barn in the 1970s, and currently at Floyd Theatre.

“When we get sneak previews, they send a courier who is supposed to remain with the film through the screening until it’s broken back down,” he said.

Education about the art of film, however, won’t die. “You have to stop thinking of it in terms of cinema and movies and think of it as digital arts,” he says. “Storytelling through the media of film is gonna take place whether it’s on 35mm, 16mm or super 8, for that matter.”