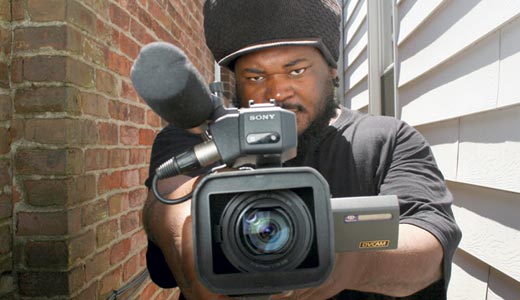 “You can take a sort of hardline national security perspective or a bleeding heart approach — I think it’s important to go with both,” Roy Germano says of how the U.S. should address concerns over immigration. “You’ll arrive at the same conclusion.”

Germano’s new documentary, “The Other Side Of Immigration,” screens at the Flyover Film Festival this weekend, and it shows the effects NAFTA, globalization, crime and poverty have had on Mexico. He conducted more than 700 interviews for the film, 95 percent of which is in Spanish, while taking household surveys for his Ph.D. Germano studies developing economies, Mexican politics and agricultural policy at the University of Texas-Austin’s Department of Government.

His timing couldn’t be more appropriate — last month’s swine flu outbreak has wrecked Mexico’s tourism industry, as has the global recession. The effects are particularly acute because Mexicans who come to work in the U.S. are sending less money back to relatives. “When the U.S. is hurting, everybody else is too,” he says.

Now, he’s taking an active role: During a panel discussion someone asked Germano what people should do about it. He froze, but two weeks ago, he and a colleague started forming a nonprofit that will help Mexican strawberry farmers, for example, pool their resources, organize cooperatives and, in turn, boost their livelihood.

“For these rural areas, democracy is a new thing,” Germano said, “and some of these people don’t even know what that means yet.”

Germano will appear at a Q&A following the screening, which takes place Saturday, June 13 at 3:30 p.m. at Kentucky Center’s Clark-Todd Hall.

The Other Side of Immigration
www.theothersideofimmigration.com

Doebalization debut
Stephon Barbour, a.k.a. John Doe, who graced the cover of LEO Weekly’s first film issue last year, will debut his film “Doebalization” Aug. 25 at U of L’s Floyd Theatre. The DVD version will be available at ear X-tacy, Better Days West, as well as Barbour’s MySpace page, myspace.com/johnsdoemain and blogspot.com/johnsdoemain. Barbour recently returned from a two-month research trip for his next film, tentatively titled “London’s Burning.” The documentary explains the aftereffects of the Brixton Riots in 1981 and 1983 through the eyes of Caribbean and Jamaican émigrés.

Nadus’ leg up
King Fish is now offering a coupon for all of June that donates 40 percent of your bill directly to Nadus Films.

The coupon is good at two locations, 3021 Upper River Road and 601 W. Riverside Drive in Jeffersonville. This is not a 40 percent discount off your meal, per se, but it does go to help Nadus (Sudan backward), a local film company searching for additional funding to complete its documentary, “The New Sudan.” You can also donate directly at nadusfilms.com.