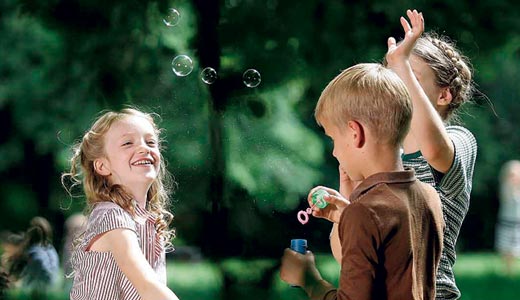 It’s a classic Hollywood story: The son of a filmmaker goes to film school and becomes one himself. His fiancée is an agent for contemporary artists. The family goes on a shoot for a high-profile film, traveling all across the most exotic parts of Europe. The daughter gets her first screen time, on a film with A-list Hollywood celebrities.

From there, the story changes from the usual. They don’t live in the OC, but the Highlands. And while the experience was fun, there seems to be no aspiration to superstardom.

Heather Kleisner and her daughter, Esme Tyler, accompanied Gabriel Wrye, who was set to edit “The Brothers Bloom,” to the shoot in Europe. Wrye had worked in Hollywood before settling in Louisville. He came here after shooting a documentary on charismatic churches and meeting Kleisner, and he set up Zoon Politikon, a production company specializing in political ads, here in 2008.

Wrye was set to work on “Bloom,” a comedy/crime caper by Rian Johnson, the director of the awe-inspiring “Brick.” The film would star Adrien Brody, Mark Ruffalo and Rachel Weisz. Shooting would take him all across Central and Eastern Europe, so the family decided to come along.

Romania, Serbia, Croatia and the Czech Republic were on the itinerary for the shoot, and it would be a learning experience for the children. But after spending months with the family, Johnson proposed casting Esme in a speaking role.

Kleisner was hesitant. “But Rian,” she said, “she’s never acted. Um, well she was a bear in a school play once, and she was really quite good, but …”

And then there was the concern about the effect of Hollywood on a young child. “Being a part-time Hollywood family, you see the pitfalls and benefits of the industry, and we’ve worked hard to raise healthy children,” Kleisner explains. Ultimately, the decision was up to Esme, who was eager for the role.

Still, stardom remains doubtful. There’s no packing up the family and moving to LA. The family is back in Louisville and Esme is back in school. For now, life is back to normal.