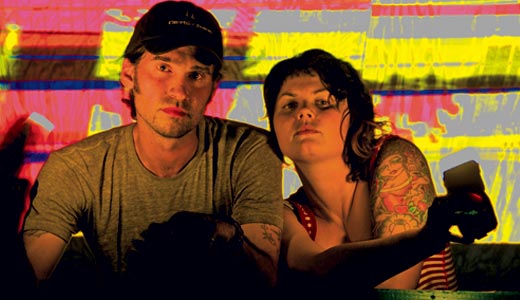 Aron Conaway and Hallie Jones are known to many in the Louisville arts community as two of the people behind LAVA House, the unique Germantown arts space that burned down last year, taking the life of resident Bill Christie.

However, the tragic event hasn’t slowed them down. The married couple is surely among the most prolific of local visual artists. Besides a regular output of photography, they shoot documentary films and experimental video.

Jones is a spokeswoman at the Center For Neighborhoods, a grassroots organization that encourages greater participation in local issues. She and Conaway are both into documenting local issues as a way to encourage activism.

They’ve created a number of video installations that reflect their anti-consumerist concerns. Their 2005 piece “One Nation Under God: Operation Whitewash” discussed “the result of consumer-capitalist empire,” Conaway said. A consistent theme in their work is the use of American political and military might to enforce American economic priorities. It’s a classic anti-globalization message for the post-9/11 world.

However, my first exposure to Conaway and Jones was in a distinctly less serious setting; they were screening films to accompany a performance by Louisville dub band The Children. As Shoot the Messenger, they’ve VJ’d for Parlour, Lucky Pineapple, Development and others.

Despite the LAVA House’s demise, they haven’t given up on their dream of giving Louisville another first-rate arts space. A few years back they bought Nelligan Hall in Portland and have been converting it into a LAVA House II.

Conaway says the couple’s recent work has been less critical of consumerist America and “more constructive and optimistic.”

Unlike many avant-garde artists who are only comfortable lobbing attacks at a large, unseen enemy, Conaway and Jones spend as much time providing answers as documenting problems.