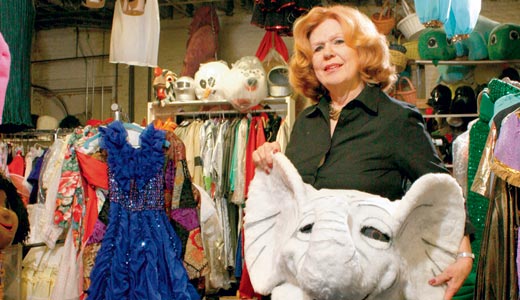 “I knew the face and the figure weren’t going to last forever,” Louise Cecil says as she leads the way through her byzantine Floyd Street costume warehouse, stacked to its I-beams with 10,000 costumes. “So when I started modeling, I started collecting.”

Cecil, a former Alix Adams/Cosmo model and Playgirl employee, shows off her enclave of entertainment, an example of what happens when an adept seamstress indulges a flair for disguise.

Is there anything she won’t make?

“No, not if the money’s right. It’s all money to me,” she says. One client wanted her identity changed so she could confront a cheating husband at the airport. They later divorced.

Film homages — Mel Gibson’s William Wallace getup in “Braveheart” — to the outrageous are fair game. “I once made a half-man, half-woman costume for a woman who wanted to go as her own date,” says Cecil, who spent after-school time replicating wardrobes she was assigned to make at her high school in Gulletsville, Tenn.

Most customers come looking for garb that reflects the “up” times — ’20s, ’50s and ’70s; 17th-century parties that pay tribute to English novelist Jane Austen are popular, too.

Cecil’s experience in film is mixed. She played a prostitute in the 1974 flick “Zebra Killer,” directed by William Girdler and filmed partially at the Floyd Street shop. But if you want to rent her costumes for your next picture, that’s tricky. After one movie company foolishly “returned” her costumes to a dumpster, Cecil requires payment up front.