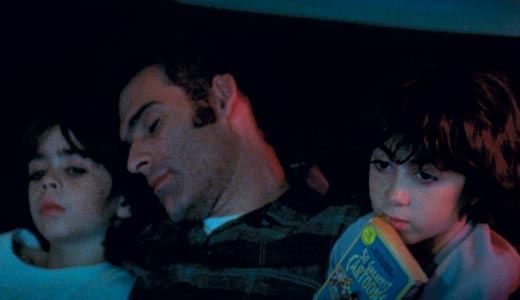 A shot from ‘Go Get Some Rosemary,’ which screened at The Director's Fortnight at Cannes this year.

Boston University film school grad Zach Treitz didn’t lie in wait to make a name for himself on the film circuit. He and a few close friends reunited in New York to form Red Bucket Films. This might be the year Red Bucket breaks out: Their film, “Go Get Some Rosemary,” was screened at the Directors Fortnight at the Cannes Film Festival in France this year. The Louisville native outlines the plot, his love for 26th Street ice cream and late-night drives down River Road.

LEO: How did you become involved in film?
Zach Treitz: I think how I got into filmmaking is a pretty standard story for this day and age. I got my mom to buy a camera from Circuit City when I was a freshman in high school at Manual and told her that we would return it after this geometry class project was through. I had two days to do the project with a couple friends and somewhere in there I got totally lost in the process of filming and editing. I didn’t film anything else until the 30-day return period expired, so that my mom wouldn’t remember to take the camera back. By the time she mentioned it again, it was too late to return it, and I just kept making little movies until it became more important to me than pretty much anything else I was doing in school. Then my friends and I started making all of these documentaries of us doing stupid things, like diving into giant bushes and faking that we were doing insane skateboarding tricks using close-ups — basically a bunch of CKY [Camp Kill Yourself] rip-offs. Then, when high school was over, I either wanted to do filmmaking or make music, and I knew I wanted to go north, so I went to Boston University for film school.

LEO: What was your role in the making of “Go Get Some Rosemary”?
ZT: We have a small film collective in Chinatown in this kind of treehouse-minus-the-trees studio. There’s six of us regularly, and we feed off of each other’s yelling, joking, insights and madness, so when someone comes up with a project they want to do, everyone else tries to step in to help in whatever way they can. For this movie, Josh and Benny wanted to make a fictionalized story based on some stuff from their childhood. It was something I could relate to personally, so I just tried to help make the movie as strong as it could be within our limits. On a technical level, there were only about five of us who were involved with the daily production of the film, plus the actors. It’s a pretty insanely small crew to make a feature film with — especially on actual film — so on that level, we all do a little bit of everything. I was mainly responsible for sound, locations and doing some lighting. It all kind of fell under the umbrella of being a producer, but that’s a term that seems to come from the way other movies have been made in the past. I didn’t wear a suit and order people around like a cop. That’s what a producer is when I think of it.

LEO: What is the significance of Directors Fortnight at Cannes?
ZT: The Directors Fortnight [they say “Quinzane de Réalisateurs” over there] was started as a total rebellion against the Cannes festival in 1968. Jean-Luc Godard, François Truffaut and Louis Malle were all mad that their hero, Henri Langlois, was ousted from the Cinémathèque, and it was from an overall discontent with the state of the Cannes festival. It’s premiered some pretty amazing films over the years: Herzog’s “Aguirre,” Jarmusch’s “Stranger Than Paradise,” and a bunch of others. More recently, the Fortnight was swallowed back up by the official Cannes festival, so now it’s one of the four categories of the overall larger festival. It’s still seen as the place for the most independent-ish movies, if that means anything anymore. Maybe non-commercial is the right word. Or director-driven. The idea is that the film is the platform for itself, not some well-known star or studio.

LEO: What themes do you think are “Rosemary”’s most powerful?
ZT: The film is about a single father who is taking care of his two sons for a couple weeks’ custody. He’s a good dad, in the sense that the kids have a good time with him, but he’s an irresponsible and erratic father. He’s somewhere between a child and adult himself. I think the movie is a good portrait of someone who is trying as hard as he can but cannot seem to get his act together. Even though he seems to be constantly struggling against situations around him, he brings his own misery down on himself. Throughout all of this, he still manages to remain funny and charming, as if it’s an act put on for the kids. Lenny kind of feels like a clown performing on the Titanic. It’s important to not look at the movie as if it has something to teach. It’s doing more to be understanding of people than to make a judgment.

LEO: How did Red Bucket start?
ZT: Red Bucket was started by my friends Alex Kalman, Benny Safdie and his brother, Josh, when they were in high school together in NYC. I met Josh in Boston and we would collaborate with Sam Lisenco and Brett Jutkiewicz on movies in college. We came together through a mutual distaste for the general feel of Boston. We all seemed to be on the fringes of the film department there. When everyone graduated, we regrouped in New York and just kept things moving. As idyllic as that may sound, we don’t get things done by being nice to each other — there’s lots of arguing and pushing and hair pulling. The conflict keeps the fire burning.

LEO: What projects do you have coming up?
ZT: Not to be coy, but I don’t really like to talk about projects that are being born. We have to wait to see. Sometimes when you talk about something or put a name to it, it can bring the project to a standstill because you’ve already put it out there — and then it exists in language rather than in the medium where it should. There are several new films at various stages in the works right now, as well as a couple websites, and a constant stream of short spontaneous documentary videos we call “buttons.” Between those things and trying to get this 7-inch from my hardcore band No Courage made, there isn’t enough time to spend in the parks and museums up here.

LEO: Favorite place to visit when you’re in Louisville.
ZT: Favorite places in Louisville is tough, not because there aren’t any, but because you don’t want to blow up your own spot. I came home for Derby and fell in love with this strange world of Churchill Downs. It’s such an antiquated-feeling way of life. The people who are there for betting on horse races around the country are my favorite, because they’ll be cheering when no race is running, just gathered around the screens inside. There’s a great place to get ice cream in west Louisville on 26th Street. There’s also nothing like a late-night drive down River Road, or an early morning one when you’re heading to Henry’s Ark. Kart Kountry’s pretty rad, too. I could also hang out at Cave Hill for hours. That’s where I’m going to be buried.