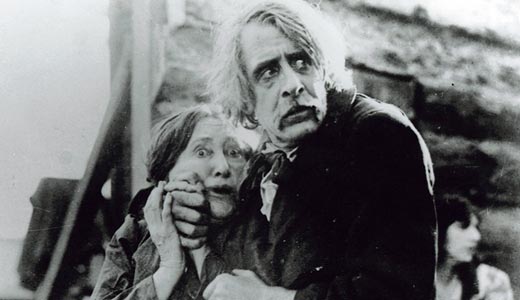 Jeers, protests and rotten eggs — how could any film survive that?

“The opposition was there in full force at the premiere,” director D.W. Griffith wrote in his unfinished autobiography “The Man Who Invented Hollywood.” “A riot was brewing. Over the boos, catcalls and hisses were the whistles and applause. It became a contest. The booers tried to drown out the applauders and vice versa. We were frightened out of wits for fear of a riot — for that would have been the end of ‘The Birth of a Nation.’”

Kentuckian David Wark Griffith might have died in 1948, but his controversial 1915 masterpiece “The Birth of a Nation” resonates as the best and the worst of early American cinema. Yet is it the movie that started it all, and it gave Griffith the moniker “the Father of Film.”

As a native of Oldham County, it makes perfect sense that the D.W. Griffith Mini-Theatre is located in the Oldham County History Center in LaGrange. It opened Jan. 22 (Griffith’s birthday), complete with a library of his movies, family artifacts and photographs.

Nancy Theiss is the executive director of the Center. Between what Theiss has researched and the Center’s holdings, they have a vast amount of knowledge on Griffith. Theiss also knows the feelings people have toward the place and the man, and that helps her understand him.

“I’ve received e-mails asking me, ‘How can you serve birthday cake on Griffith’s birthday?’” she says. “We appreciate the accomplishments he made toward film, and we have the responsibility to interpret Griffith.”

Griffith’s rise to fame was swift. He moved to New York City from Louisville to become a playwright but ended up an actor. That led to directing shorts, 10-15-minute films, beginning in 1908. “Some of the shorts were on committing suicide, relationships, child abuse — controversial topics,” Theiss says. “The character of the women is very strong. He didn’t hold back at all.” What Griffith seemed to understand intuitively was that movies had the power to produce a wide range of emotions.

He made more than 400 films, most of them shorts. During that time, Griffith perfected many technical shots, including the close-up, flashback and fade out.

One of Griffith’s career goals was to create an epic Civil War film. His father was a Confederate Army colonel and Kentucky legislator who died when Griffith was a child.

“The Birth of a Nation” shows the Ku Klux Klan as the saviors of the Southern whites against the freed African-Americans and Northern white carpetbaggers. Also known as “The Clansman,” it became the first blockbuster feature-length film (131 minutes). Its popularity was marred by the racist views it expressed and protests became the norm, especially in northern cities. The National Association for the Advancement of Colored People (NAACP) helped lead the fight against it.

“It represents the white point of view; Civil Rights wasn’t on their radar,” Theiss says. “I used to think he sent the Civil Rights movement back 20 years, but I think now he’s moved it ahead 20 years because it inflamed so many people.”

It was the first film shown in the White House. After viewing it, President Woodrow Wilson said it was “like writing history with lightning.”

Griffith co-founded United Artists Motion Pictures with partners Charlie Chaplin, Mary Pickford and Douglas Fairbanks in 1919. While some of his features were successes, most were not. His last movie was 1931’s “The Struggle.”

He returned to Kentucky in 1936, the same year he received an honorary Academy Award “for his distinguished creative achievements as director and producer and his invaluable initiative and lasting contributions to the progress of the motion picture arts.”

Griffith died of a stroke and is buried at the cemetery of Mt. Tabor Methodist Church in Centerfield, near Crestwood. The Directors Guild of America contributed a monument for his grave two years later.

In 1953, the DGA named its highest honor the D.W. Griffith Award. That changed in 1999 when they decided to rename it the Lifetime Achievement Award, citing that “Birth of a Nation” had “helped foster intolerable racial stereotypes.”

The National Film Registry collects and preserves movies that are “culturally, historically or aesthetically significant.”

Five of them are Griffith’s.