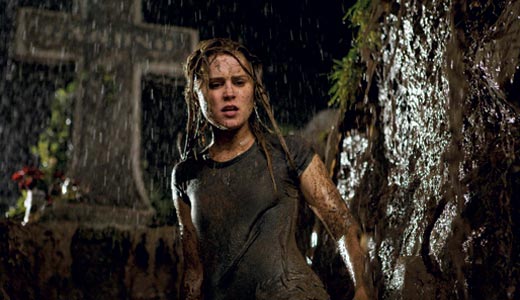 The man behind the Spider-Man movies is getting back to his roots. Like a lot of directorial talent, Sam Raimi first made an impact via horror movies that didn’t require a big budget but consistently stood above their peers. His “Evil Dead” trilogy is worth seeing for many reasons, including a clever streak of comedy inspired by The Three Stooges. Now Raimi’s delivered a fast-moving, black-humored scarefest in which even the most underwhelming aspects are delivered with a skill that’s been honed by working with Hollywood’s best. This movie is designed to be an old-fashioned thrill ride (note the PG-13 rating). It succeeds because once you buckle up, you’re in the hands of consummate professionals.

The horror genre’s recent sad slippage into torture-porn, simplistic slashers and cannibalistic zombies is arrested almost immediately by the movie’s script and pedigree. The initial scenario has a low-level bank suit (Alison Lohman) struggling to take one more step toward her dream to evolve from backward farm kid to confident bank executive. She makes a knee-jerk decision to foreclose on the house of an old woman. It’s such a mundane setup, yet it’s (all too) up to date with the straits many of us face today — on one or the other side of the loan desk.

The decision to foreclose is followed by the first of many funny/icky sequences. The old lady is nobody’s gift as a bank customer, it turns out — she’s a vindictive crone who throws gypsy curses at those who upset her. And her curse for Lohman’s character is a doozy: A demon will torment her for three days and then drag her down to the fires of Hell.

Once the supernatural takes center stage, the film dabbles in and bounces off its antecedents in classic horror. Jacques Tourneur’s “Curse of the Demon” — itself a freewheeling revision of M.R. James’s touchstone story “Casting the Runes” — is given tribute/ripped off multiple times, right up to the closing scene on the train tracks.

But James was a gentle Oxford academic — he wasn’t one to make fun of endangering kittens. And Tourneur didn’t have eyeballs moving around the screen in his movies. Raimi does all this and more, going so far as to have one fight scene make direct homage to those great screen combatants, Wile E. Coyote and the Roadrunner.

The rhythms of feint/quiet/fright sequences, and the performance by Lohman, eventually wear just a little thin — but there’s so much of interest happening so fast (thanks to wonderful editing) that only the most extreme of demanding viewers will not embrace this modestly upscale, beautifully executed chiller. They can go on out to the lobby and join the very squeamish. This horror flick proudly bears some old-fashioned spirit, using eerie swirling winds and suddenly-morphing shadows more often than CGI boogiemen. But Raimi’s a thorough, modern craftsman of scares, and he won’t overlook the possibilities when houseflies and embalming fluids find their way into the most unexpected and sensitive of places.