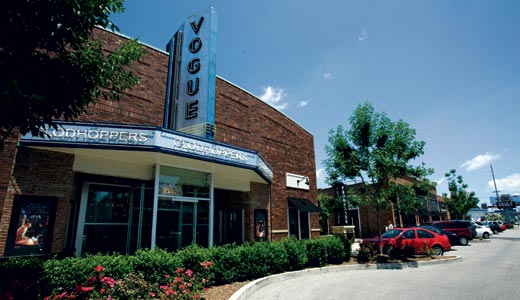 “Cinema Inferno,” by Laura Varda, is the newest and most extreme version of the ultra-hip “Mumblecore” subgenre of American indie films.

The title is a reference to “Cinema Paradiso,” that misty-eyed 1980s Italian movie about the transformative power of cinema. Here, it’s an assessment of gentrification and globalization in one square block of a medium-sized Southern town. Life here is hell.

Watching the movie is also hell. It’s a documentary-style film about five small shops living in the shell of what was once an independent movie house. Like the lives of its three main characters — Brittany, Lucas and Pumpkin — the movie is annoyingly dull and listless.

Brittany (Rachel Grossman) is 30, pretty but not gorgeous, and killing time before a hair appointment at a nearby salon. Pulling up to the complex in her Lexus SUV, she parks in front of a sign for the Cinema Paradiso, which actually houses a shoe store called “Kitten Heals” [sic]. Brittany spends 20 minutes in the store trying on a pair of moccasins and talking on her cell before going next door for a slice of pie and a latte in a small café.

Lucas (Daniel England) works in a store that makes edible gifts. He’s first introduced to the audience while making a bouquet of kiwis and strawberries, but we also spend a sizeable chunk of time with him as he explains to a rich, elderly customer why he can’t provide a refund because her granddaughter “doesn’t eat fruit.”

And Pumpkin is a Teacup Pomeranian played with admirable sincerity by Will Oldham (we know he’s supposed to be a Teacup Pomeranian from a conversation early in the movie). Sitting on the floor of a clothing boutique, he chews on an organic vegetarian doggie bone purchased moments ago by his owner. With his designer collar and healthy sheen, it’s obvious that his life is better than Lucas’s.

By the end, I was pleading for the apocalypse — or at least a Marxist revolution — to destroy all this soulless affluence. But I also had to acknowledge the hypocrisy of it all. Laura Varda is a graduate of NYU’s Tisch film school, a résumé-builder that sets most people back 150k.

And Varda’s bio puts her home in a trendy, gentrified part of Brooklyn; the difference between her lifestyle and that of Brittany is only a matter of degree. And, no doubt her film was financed by private donors not so different than Brittany, people who own Pumpkins and condescend to Lucases. What I could never shake is the feeling that this movie has a “biting the hand” quality to it.