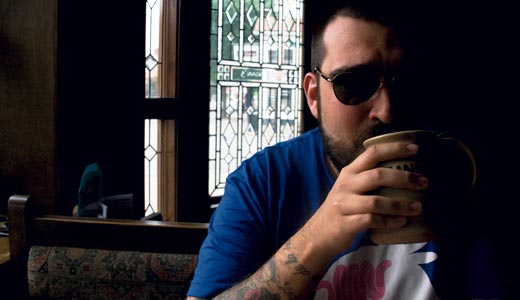 It’s a combination simple and appealing but surprisingly rare; try mixing some drinks at Showcase Cinemas Stonybrook and see how it goes over. But Andy Schanie, the founder of the Last Call Film Festival, has been filling that void in Louisville for four years. Held at the beloved Old Louisville watering hole The Rudyard Kipling, the multi-day event features new and rare movies, speakers and bands.

Schanie insists that despite the presence of a bar, crowds aren’t rowdy, just social. “I see a lot of people smiling and having a good time,” he says. “No one has gone ‘Animal House’ on me. And no, that’s not a dare.”

This year’s event, to be held June 26-27, will feature dozens of movies, including “30 Century Man,” a lauded documentary about singer/songwriter Scott Walker, and a performance by the Octopus Project, an Austin, Texas-based band that will incorporate video into their set. As was the case last year, there will be a “surprise horror movie.”

Schanie grew up playing in local bands known for their raucous live shows: Bodyhammer, Teen Pregnancy! and others. After burning out on music, he turned to movies to keep himself going. Last Call sprang from that change.

Currently, he’s working on a book (about famous scandals of the film industry) and recently co-produced a “B” zombie movie called “The Sick and the Dead.”

The production credit came about almost by accident: He screened a short at the first Last Call, thought it would be a great feature film and pretty much handed over his profits from the festival to help out the director. The result is a deeply bizarre horror movie with silly costumes and bad wigs — the type of movie to watch while drinking a beer.

“When some of my family found out they thought I was on the verge of being famous,” Schanie says. “I had to set them straight. I’m still working the office job. Zombies don’t pay the bills. Especially zombies wearing wigs.”